Borrell: Sorry that Europeans failed to meet commitments under JCPOA 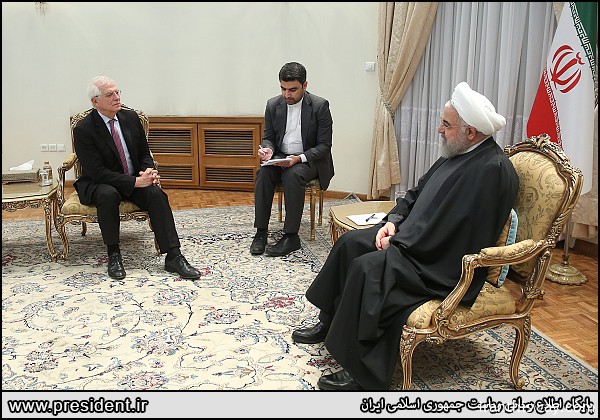 Stating that efforts have to be expanded to implement the JCPOA, EU’s Foreign Policy Chief Josep Borrell said, “I am sorry that the European parties failed to meet their commitments under the JCPOA.”

During their meeting, Iranian President said that Iran is fully committed to its obligations under the Joint Comprehensive Plan of Action (JCPOA), criticizing the other side’s failure to live up to its commitments and adding, “The Islamic Republic of Iran is still ready to interact and cooperate with the European Union to settle issues.”

He also said that developing relations and cooperation with European countries, as long-standing partners, is always important to Iran, expressing hope that relations further deepen with the efforts of the new EU foreign policy chief.

Referring to the process of efforts that eventually led to the JCPOA over 12 years, the president said, “Unfortunately, the unilateral withdrawal of the United States from the agreement created many obstacles and difficulties for other parties to fully implement it.”

Rouhani stated that Iran’s move to reduce its obligations was within the framework of the agreement and to maintain it, adding, “The Islamic Republic of Iran is still fully ready to interact and cooperate with the European Union to settle issues and whenever the other side lives up to its commitments completely, Iran is ready to return to its commitments.”

Condemning US policy toward regional countries, he said, “They have already made a lot of strategic mistakes towards regional countries, including Iran, Iraq, Lebanon, Yemen, Syria and Afghanistan, and their recent move that was done in cooperation with the Zionist Regime under the title of “Deal of the Century” is in accordance with these mistakes and is doomed to fail.”

Rouhani said that today, the region is not in a good condition and terrorism has not yet been fully eradicated from the countries of the region, saying, “America assassinated General Soleimani, who was the leader of fighting terrorism in the region, and this was a tremendous help to the terrorists in the region.”

The President praised the joint efforts of Iran and the European Union to resolve many regional and international issues, saying, “The Islamic Republic of Iran remains committed to the IAEA’s monitoring, the process of which has been continuing to date and it will continue unless we face new conditions.”

EU’s Foreign Policy Chief Josep Borrell, for his part, referred to Iran’s influential role in regional affairs and the development of peace, stability and security in the region, saying, “Developing cooperation with Iran has always been important for the EU.”

“I am sorry that the European parties failed to meet their commitments under the JCPOA,” he said, adding that efforts have to be expanded to implement the deal.

Stating that today European countries are seeking to preserve the JCPOA and resolve issues to keep the deal in place, Borrell said, “As the EU’s High Representative, I will do everything in my power to create a robust interaction for saving the JCPOA.”