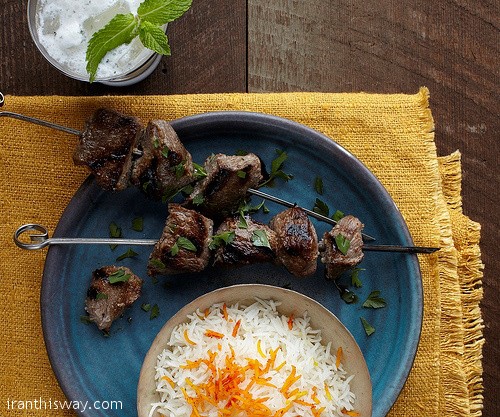 A visit to Iran yields a stunning variety of culinary delights. That’s because of the country’s unique history and geography, which translates to a diverse mix of cultural in×uences on the cuisine. Louisa ShaÖa, author of The New Persian Kitchen, guides us through the basics.

A visit to Iran yields a stunning variety of culinary delights. Between the familiar kebab and the decidedly outré grilled lamb’s testicles, there’s a vast spectrum of foods: caviar, pickle, and smoked äsh in the north; samosas, falafel and hot and sour shrimp in the south; noodles, åatbread and rosewater-scented ice cream across the country. Take a look at Iran’s place on the map and it’s easy to understand why the scope of native foods is so wide. Once the center of the Persian Empire, Iran neighbors the former Soviet Union countries, as well as Afghanistan, Pakistan, the Arab states and Turkey. Although Iran is part of the Middle East, it has close ties to Europe, the Far East and Africa, owing to its central place on the Silk Road trade route./By: Louisa ShaÖa: 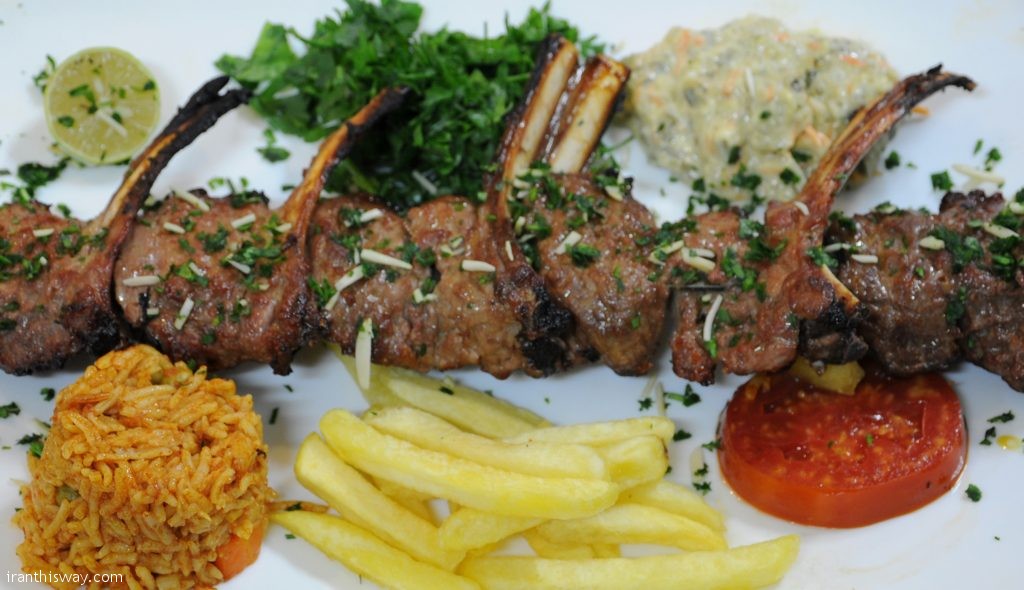 Kebabs come in many kinds: beef, chicken, lamb liver, among them.

What’s more, the ancient warrior-king of Greece, Alexander the Great, conquered the Persian Empire back in the 4th century, and later it was invaded by Arabs, Turks, Mongols and Uzbeks. While Iranians already had a well-developed food identity before these invasions, they assimilated what the outsiders brought in. Think Russian-style borscht with cumin and cilantro and Chinese noodles in a soup of beans, herbs and sour fermented whey. Many coveted ingredients are native to Iran, including pistachios, almonds, walnuts, saffron, mint, oranges, pomegranates and grapes. Iran has a variable climate with four distinct seasons, and unlike other parts of the Middle East, where the dry terrain limited what food could be grown, the ancient Persians transformed vast stretches of arid land into fertile oases via underground aquifers that drew melted snow water into the desert. A bright, sensuous, fruit-and-herb älled cuisine was born. A core curriculum of classic Persian favorites can be found on most Persian-American restaurant menus. Here are 10 to try. Noosh-e jan! (Yes, that’s Farsi for “bon appétit.”) 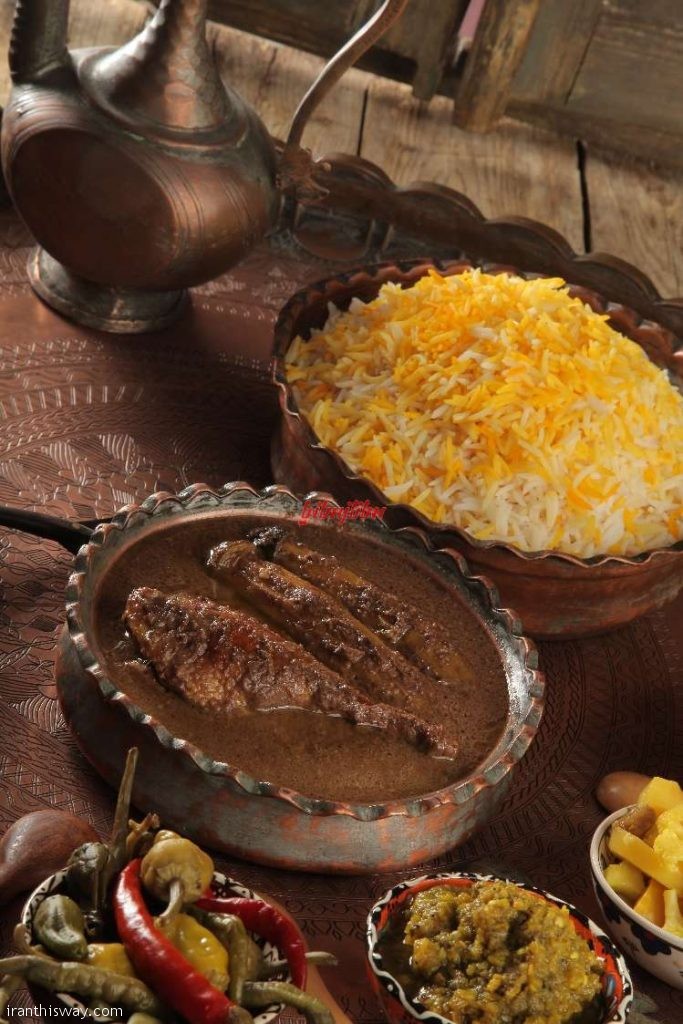 1. Fesenjan (Pomegranate Walnut Stew) This iconic stew, an essential part of every Persian wedding menu, pairs tart pomegranate with chicken or duck. Ground walnuts, pomegranate paste and onions are slowly simmered to make a thick sauce. Sometimes saffron and cinnamon are added, and maybe a pinch of sugar to balance the acid. Fesenjan has a long pedigree. At the ruins of Persepolis, the ancient ritual capital of the Persian Empire, archaeologists found inscribed stone tablets from as far back as 515 B.C., which listed 5/9/2016 Persian Food Primer: 10 Essential Iranian Dishes – Food Republic http://www.foodrepublic.com/2014/10/29/persian­food­primer­10­essential­iranian­dishes/ 4/9 pantry staples of the early Iranians. They included walnuts, poultry and pomegranate preserves, the key ingredients in fesenjan. 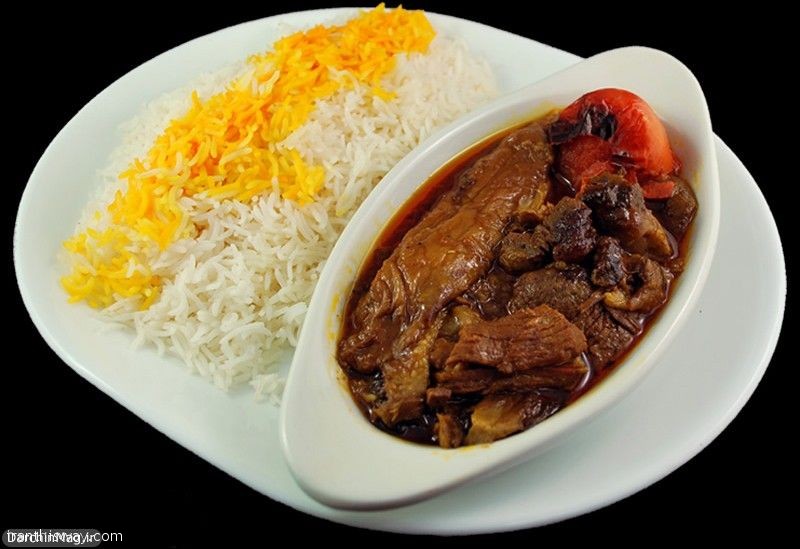 2. Bademjan (Eggplant And Tomato Stew) This stew has the shimmering red-gold color of tomatoes cooked with turmeric, with a sheen of oil on top, a prized characteristic in Persian cooking that shows a stew has been cooked long enough for the oils to rise up. Slightly tart, with the tang of tomatoes, lemon juice, and sometimes the juice of unripe grapes, its tanginess is kept in check by the eggplant, which is ärst fried on its own until golden-brown, then cooked with onions, lamb and the tomatoes and seasoning. Like all Persian stews, bademjan is thick and meant to be eaten over rice with a fork. 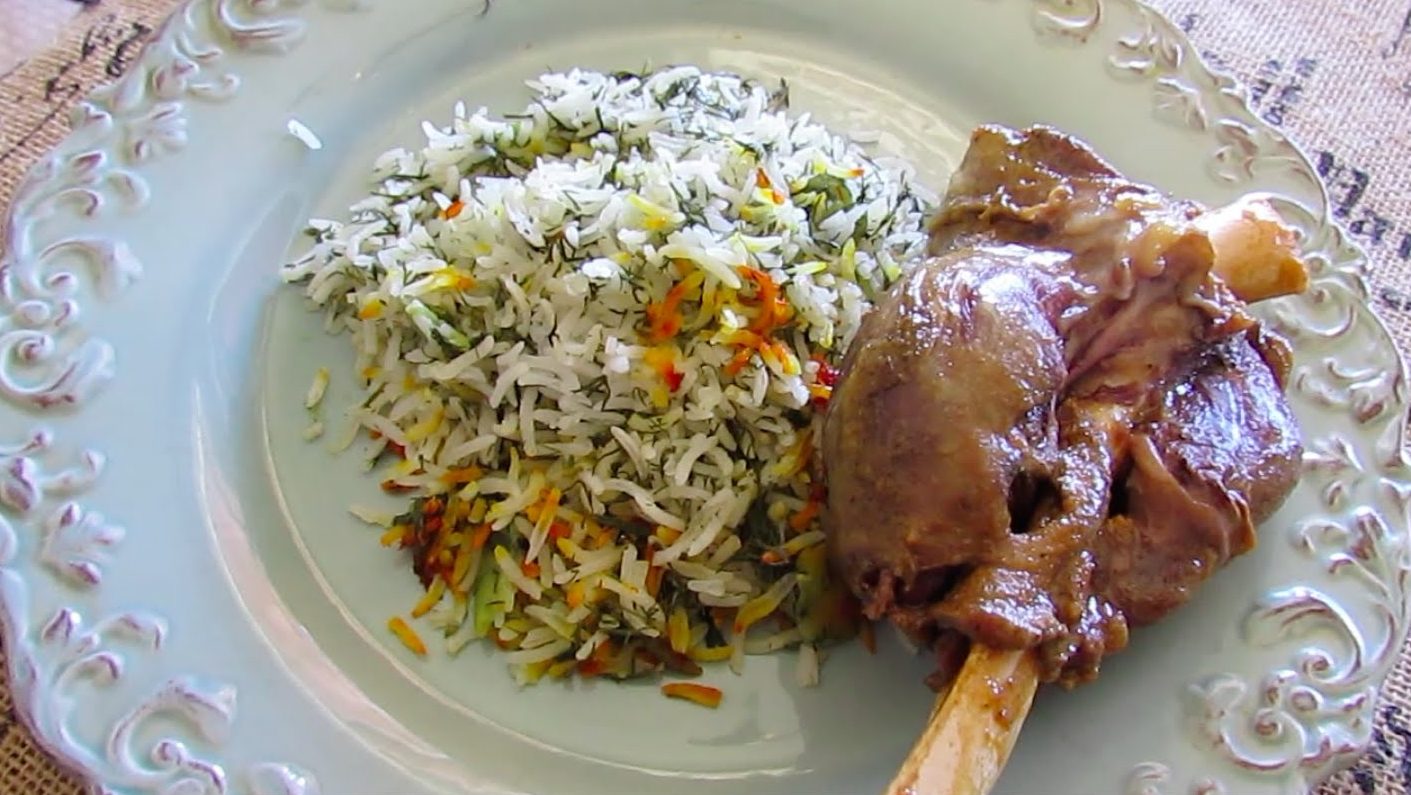 3. Baghali Polo (Rice With Dill And Fava Beans) In Iranian cooking, rice can be prepared simply with butter and saffron, known as chelo. But just as often, it’s cooked with other ingredients and called polo. Polo can be made with herbs, vegetables, beans, nuts, dried fruit, meat and even noodles, and acts as the centerpiece of the meal. This polo is particularly good in the spring, when fava beans are young and tender and dill is in season. The dish is åecked with green dill and favas, and is often cooked with very tender chunks of lamb. Alternately, it may be served alongside lamb on the bone. The rice should have a mild saffron åavor, with the saffron mixed into the rice just before serving. 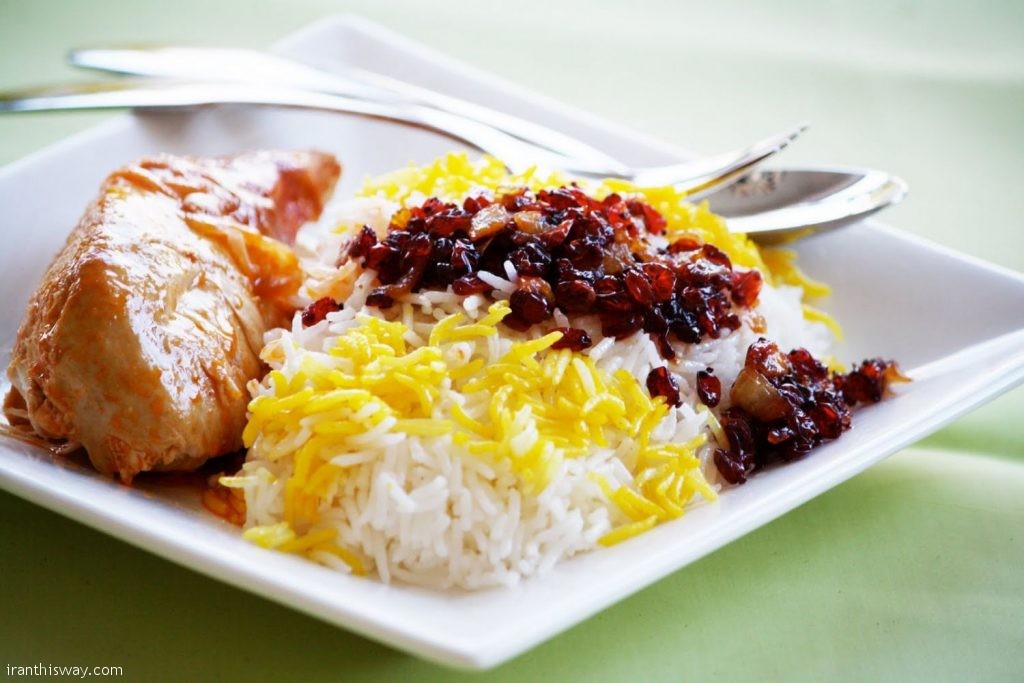 4. Zereshk Polo (Barberry Rice) Iranians love sour åavors. Like cranberries, barberries have a vibrant red color, but they’re even more sour. This classic rice dish is studded with the red berries, which are dried and then rehydrated before cooking. The rice is cooked with plenty of butter, which helps to soften the intensity of the berries. Quince, rhubarb, green plums, sour oranges, lemons, limes, dried limes, sour cherries, tamarind, sumac and pomegranate are all used in Persian cooking to make food more tart.

5. Gormeh Sabzi (Green Herb Stew) Made from herbs, kidney beans and lamb, deep green gormeh sabzi satisäes two Persian åavor obsessions: it’s sour and full of herbs. The stew is seasoned with dried limes, limoo omani in Farsi. These limes are extra intense and sour, with a bittersweet taste that gives the stew a unique åavor. The other constant in gormeh sabzi is fenugreek leaves, a taste unfamiliar to most westerners. Other herbs include parsley, coriander and scallions. 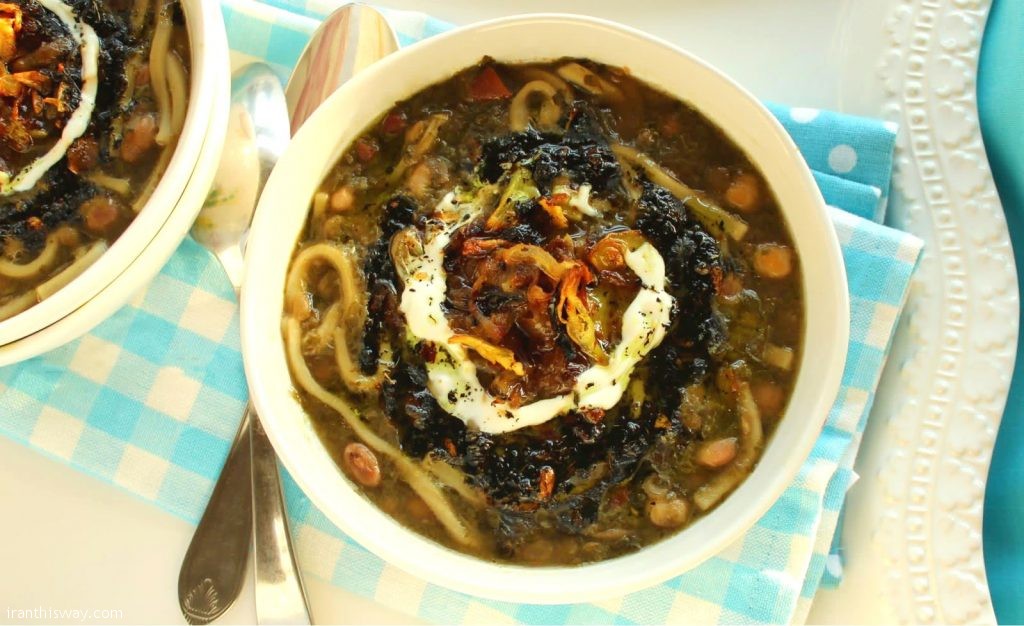 6. Ash e Reshteh (Noodle and Bean Soup) A richly textured soup full of noodles, beans, herbs and leafy greens like spinach and beet leaves. It’s topped with mint oil, crunchy fried onions and sour kashk, a fermented whey product eaten in the Middle East that tastes akin to sour yogurt. The noodles, which made their way to Iran from China, are thought to represent the many paths of life, and this soup is traditionally served when someone sets off on a long journey. Because of its auspicious ingredients, it’s also part of the menu for Norooz, the Persian new year, which occurs at the spring equinox in March. 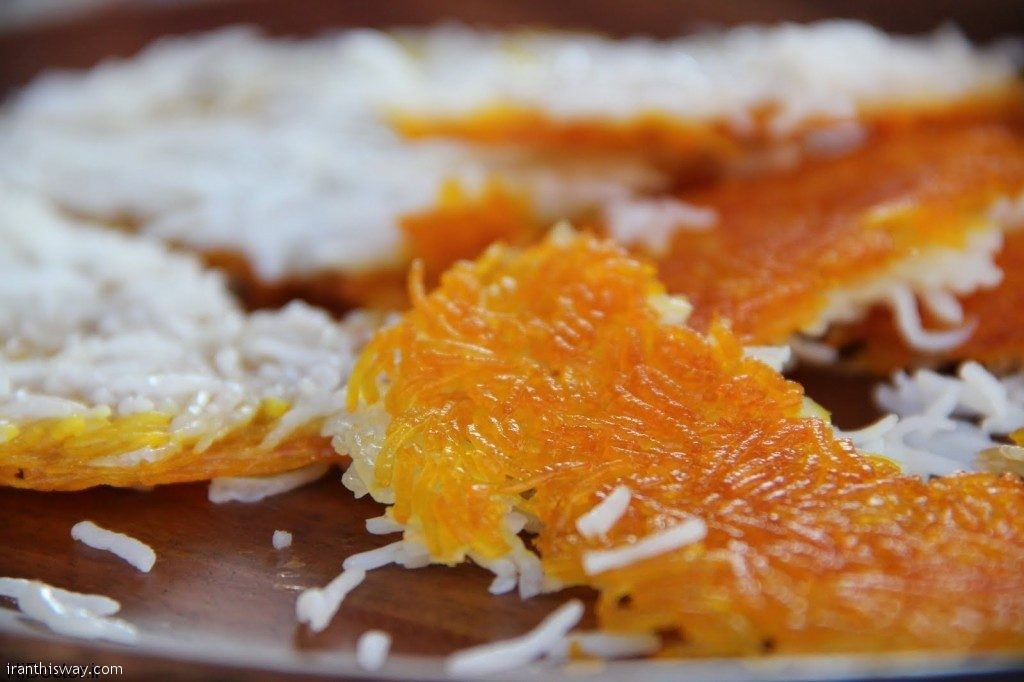 It’s the crisp, golden layer of fried rice at the bottom of the rice pot, and it tastes like a combination of popcorn and potato chips, but with the delicate åavor of basmati ice. (Tahdig is usually not printed on the menu, so you may have to ask for it.) At Iranian family gatherings, there are always plenty of leftovers, but the one dish that disappears completely is tahdig. It’s eaten as a side dish, and it’s forgivable to pick it up and eat it with your ängers 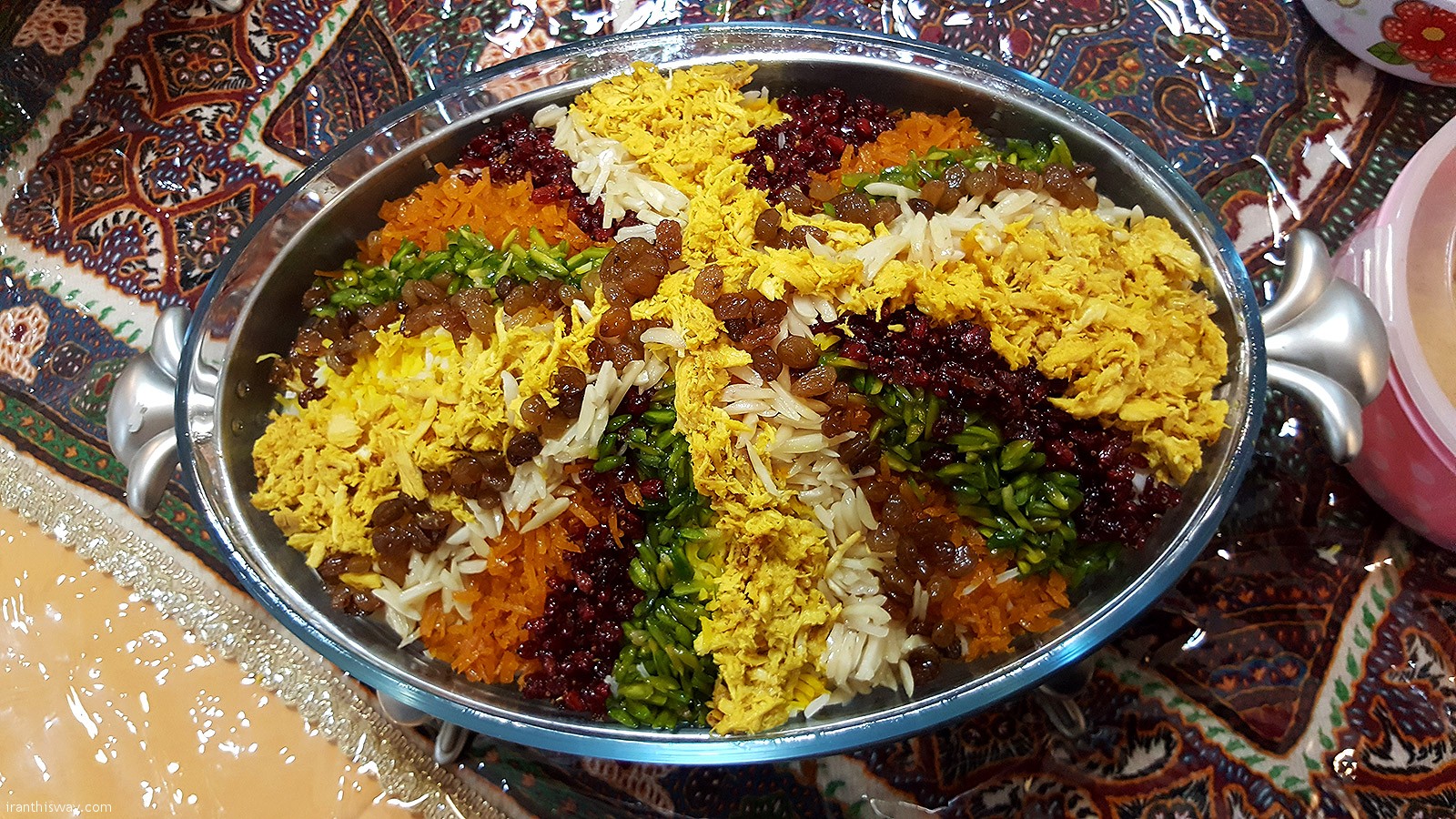 8. Jeweled Rice (Rice with Nuts and Dried Fruit) Dotted with brightly colored dried fruit and nuts, like little jewels, this is a sweet-andsavory dish that shows off some of the native ingredients of Iran, including pistachios, almonds, candied orange peel, barberries, carrots and saffron. It’s cooked with a little sugar to balance the sourness of the barberries. Jeweled rice is served for special occasions, particularly at weddings, because the sweet elements symbolize a sweet life. It’s traditionally served with chicken, which contrasts nicely with the sweetness. 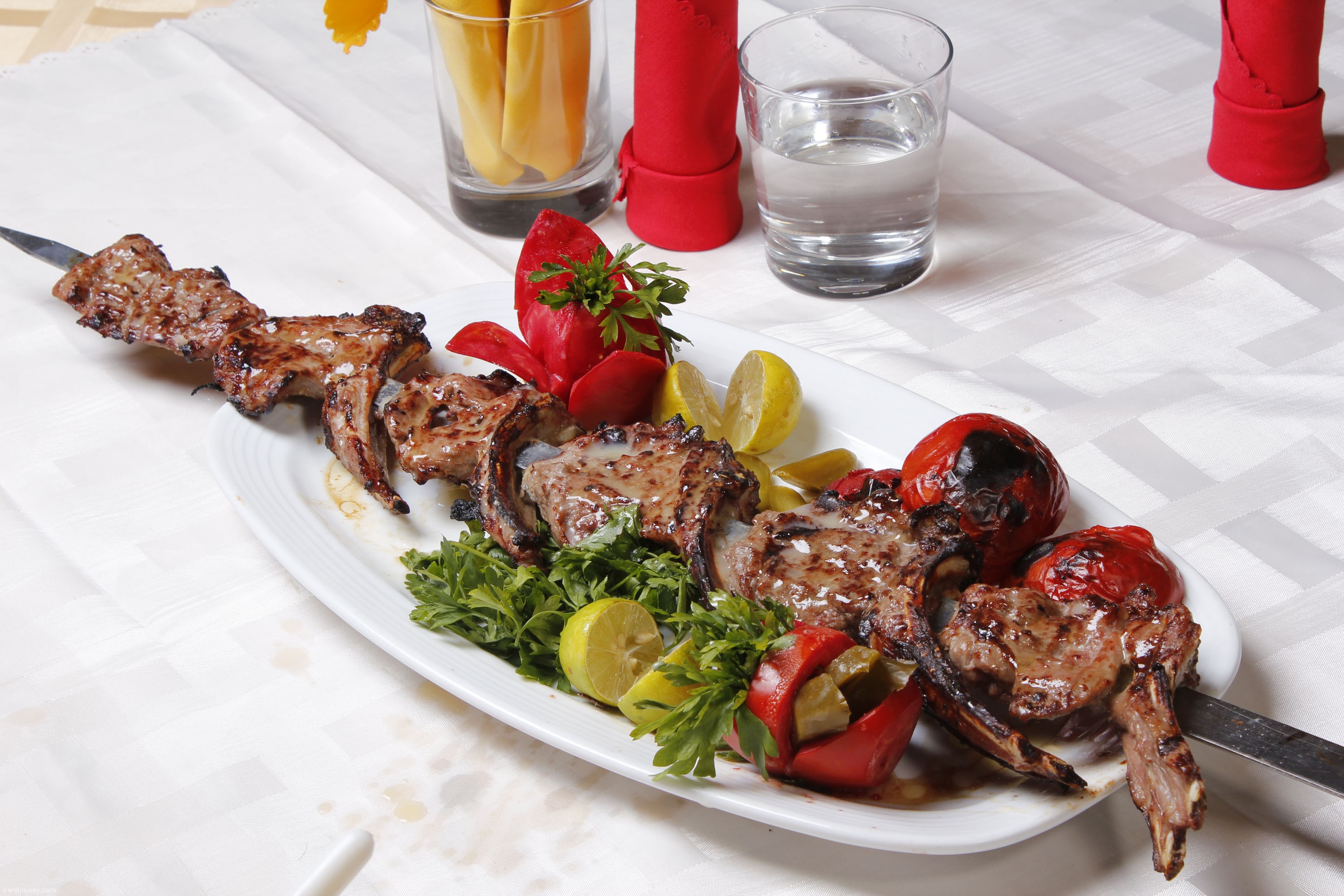 9. Kebab (Lamb, Chicken, Lamb Liver, Ground Meat) Kebabs have more variety than you might think. First, there’s koobideh, ground meat seasoned with minced onion, salt and pepper. It sounds simple, but the taste is sublime. There is kebab-e barg, thinly sliced lamb or beef, åavored with lemon juice and onion and basted with saffron and butter. Chicken kebab, known as joojeh, is traditionally made from a whole chicken, bones and all, for more åavor (although in American restaurants it’s often made from skinless chicken breast), marinated in lemon and onion, and basted with saffron and butter. If you’re lucky, you’ll änd jigar, lamb liver kebab, garnished with fresh basil leaves and a wedge of lemon. 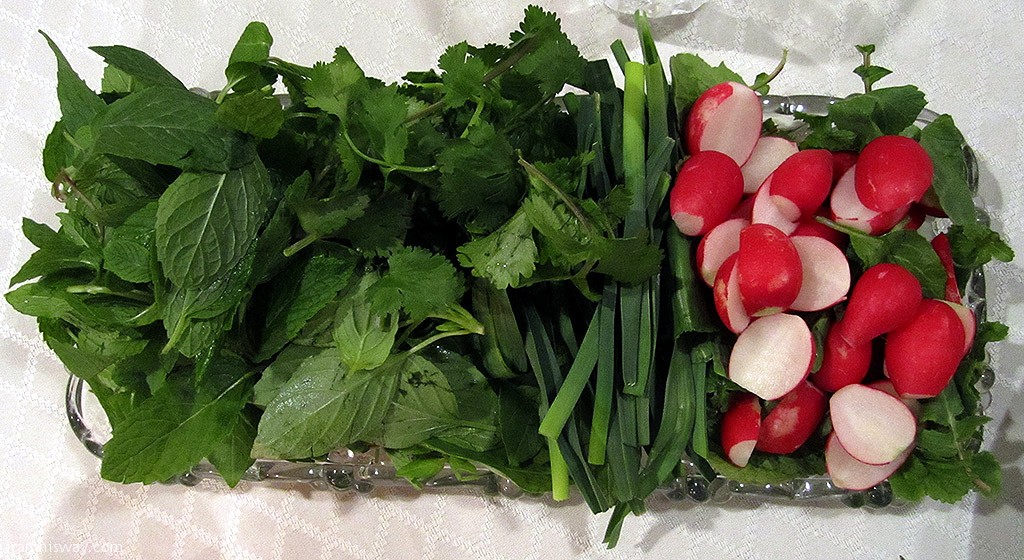 10. Sabzi Khordan (Herb and Cheese Plate) No Persian meal is complete without a dish of sabzi khordan, or edible herbs. The plate can include mint, tarragon, basil and cilantro, alongside scallions, radishes, walnuts, feta cheese and Iranian nan (åatbread). Simply tear off a piece of åatbread, tuck a bit of the herbs and cheese and other garnishes inside, and fold it up like a rustic sandwich. The plate stays on the table throughout the meal, and the herbs are a crunchy palate cleanser between bites of stew and rice. Fresh and dried green herbs are eaten daily in Iran. The Zoroastrian new year Norooz celebrates rebirth and renewal, and the Norooz menu includes several dishes made with green herbs representing new life, including rice with herbs, an herb omelet and the herb platter.