Firouzeh Mirrazavi: The traditional music of Iran is a message, a call from the artist’s innermost consciousness. Deeply intertwined with Iran’s age-old history and culture, it is an expression of the joys, loves, sorrows, efforts and struggles, all the many victories and defeats that the peoples of Western Asia have experienced over the millennia. It is something of a miracle that these people have kept their music intact despite numerous, murderous foreign invasions – in fact, imposing their own art, lifestyle and generous view of the world on their invaders.

Persian traditional music or Persian/Iranian classical music is the traditional and indigenous music of Iran and Persian-speaking countries, the science and art of music, the sound and performance of music (Sakata 1983). 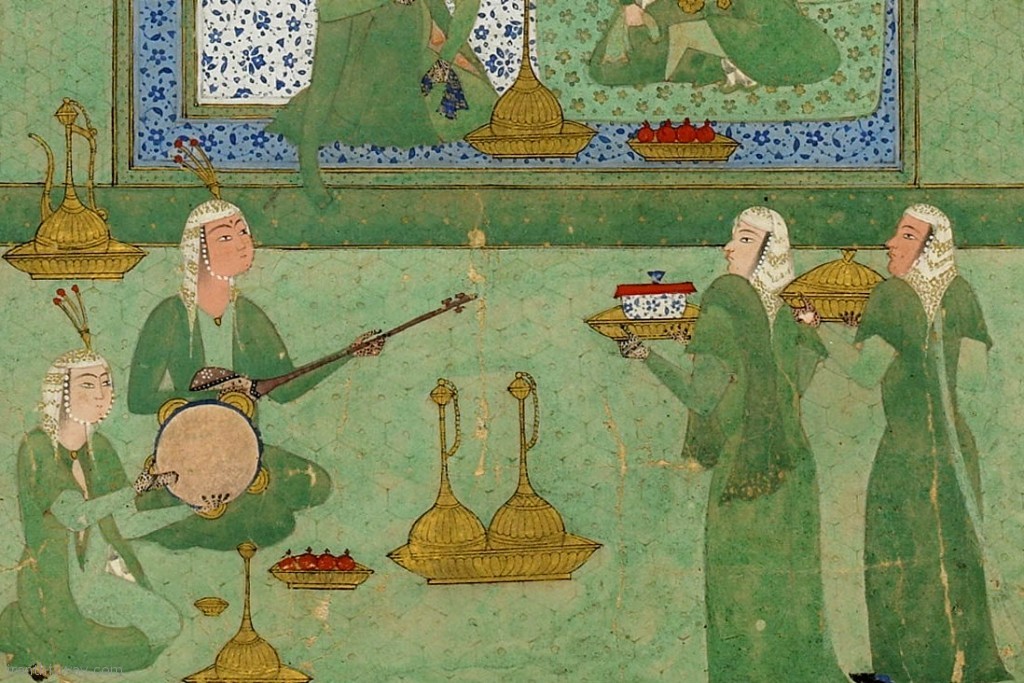 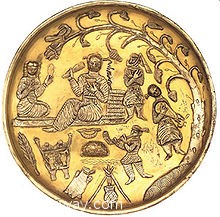 Archeological evidence reveals musical instruments that were used in Iran during the Elamite era around 800BCE. Not much is known about Persian music in the ancient world, especially about the music of the Achaemenid Empire. Alexander the Great is said to have witnessed many melodies and instruments upon his invasion, and music played an important role in religious affairs. Music played an important role in the courts of Sassanid kings in the much later Sassanid Empire. Of this period, we know the names of various court musicians like Barbad and the types of various instruments that were used like harps, lutes, flutes, bagpipes and others. Under Sassanid rule, modal music was developed by a highly significant court musician, Barbad, called the khosravani. While today’s classical music tradition in Iran bears the same names of some of the modes of that era it is impossible to know if they sound the same because there is no evidence of musical notation from the Sassanid period. Today’s traditional Persian music began to develop after the advent of Islam in Iran, in the Medieval era and the creation of today’s formal, classical music tradition is directly linked to the music systems of the Safavid Dynasty. Under the later Qajar Dynasty, the classical system was restructured into its present form. 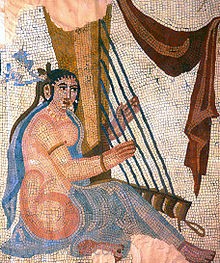 Under the Achaemenids (550-320 BCE), music served an important function in worship as well as in courtly entertainment. Bas-reliefs from the period clearly depict groups of singers, players of trigonal harps (chang), accompanied by large tambourines, as well as long necked lutes and double-flutes. The first written evidence of Persian music is from the Sassanid Period (226-643 CE). Khosrau II was a great patron of music, and his most famous court musician, Barbod, was said to have developed a musical system with seven modal structures (known as the Royal Modes), thirty derivative modes, and 365 melodies, associated with the days of the week, month and year.

The Arrival of Islam

With the advent of Islam in the 7th century A.D., Persian music, as well as other Persian cultural elements, became a formative element in what has since become “Islamic civilization”. Persian musicians and musicologists overwhelmingly dominated the musical life of the Eastern Islamic Empire. Baghdad became the centre of Persian music, and many musicians who were once considered to be Arabs are actually now known to have been Iranians. Farabi (d. 950), Ibn Sina (d. 1037), Razi (d. 1209), Ormavi (d. 1294), Zalzal (d.791), Ziryab, and Maraqhe-e (d. 1432) are a few of the many outstanding Persian musical scholars of the early Islamic period.

The 13th Century – Theory and Synthesis

In the 13 century, Arab-Persian music theory became largely standardized into what became as the Systematist or Iraqi school (since it developed in the court of Baghdad). The pioneer of this school was Safi Al Din Ormavi (from northwestern Iran) who provided a theoretical synthesis of the many systems of intervals and scales proposed before his time. He divided the octave into seventeen notes, giving each note a name. Various juxtapositions of these notes formed the basis of twenty named modes or maqamat, which to this day provide the theoretical basis for all different kinds of Middle Eastern music. 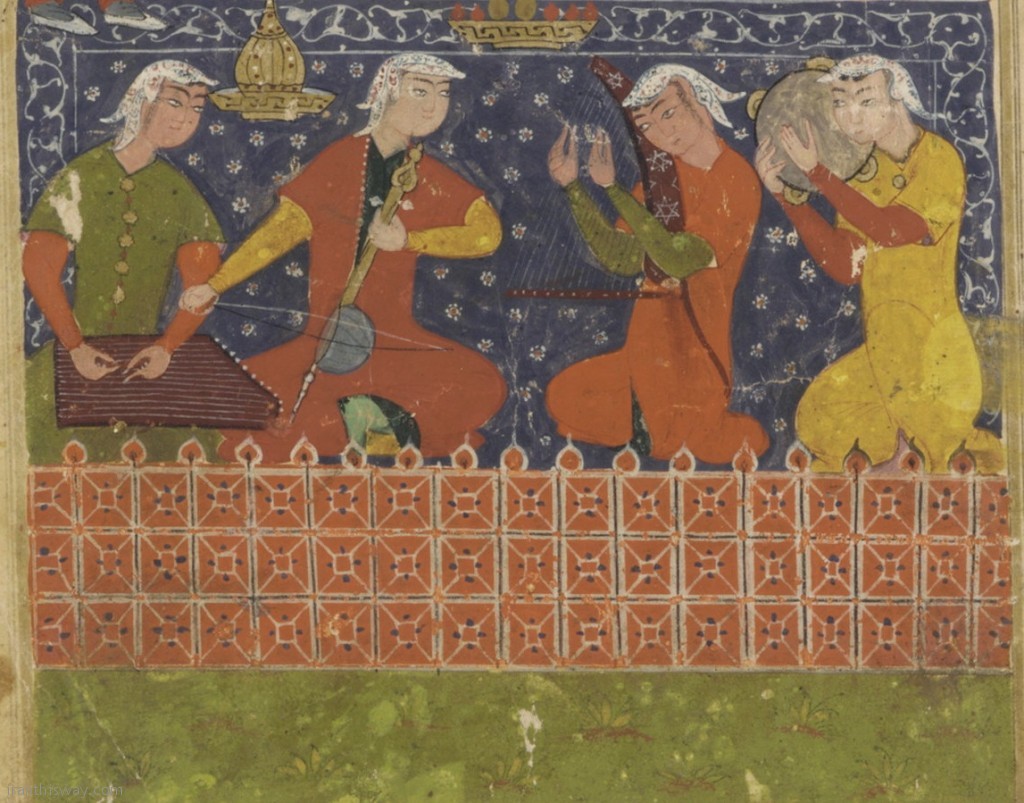 The Mongol invasion of Persia (from 1220), drastically changed the socio-political environment of the region. During this period, Shiite theology became established, and Sufism became erfan (gnosis) and penetrated deep into Persian lyrical poetry. The musical style of Araq (western Iran) gradually adopted the structure and emotional language of ghazal (a form of Persian poetry) and poetry became the main source of avaz (vocal section). During the 16th to 17th centuries, Persian music began to follow its own course and diverged from that of its Arabic, Turkish, and Tajik neighbors.

With the rise of the Safavid dynasty at the end of the fifteen century, and the increasing influence of Shiism, music in Persia declined. The court still patronized musicians, but their art became subject to the authority of Shiite clerics, who viewed it with suspicion. Musical performance was given over to illiterate ‘labourers of pleasure’. The brilliance of the Persian tradition passed to India, where the ruling Moguls were Turco-Mongols, deeply influenced by Persian court culture. In Iran, musical traditions were kept alive by Sufis and performers of taziye (Shiite passion plays). 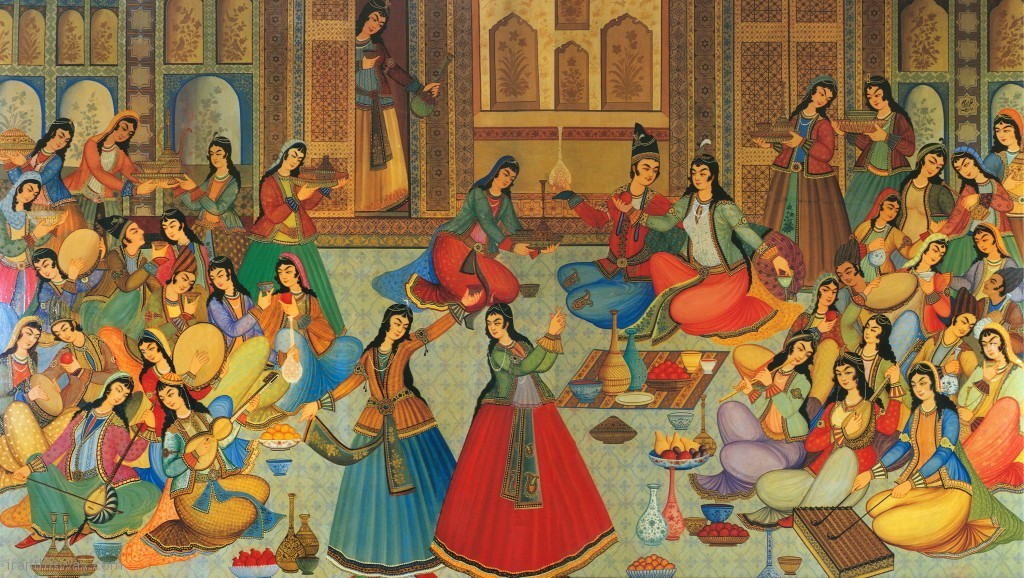 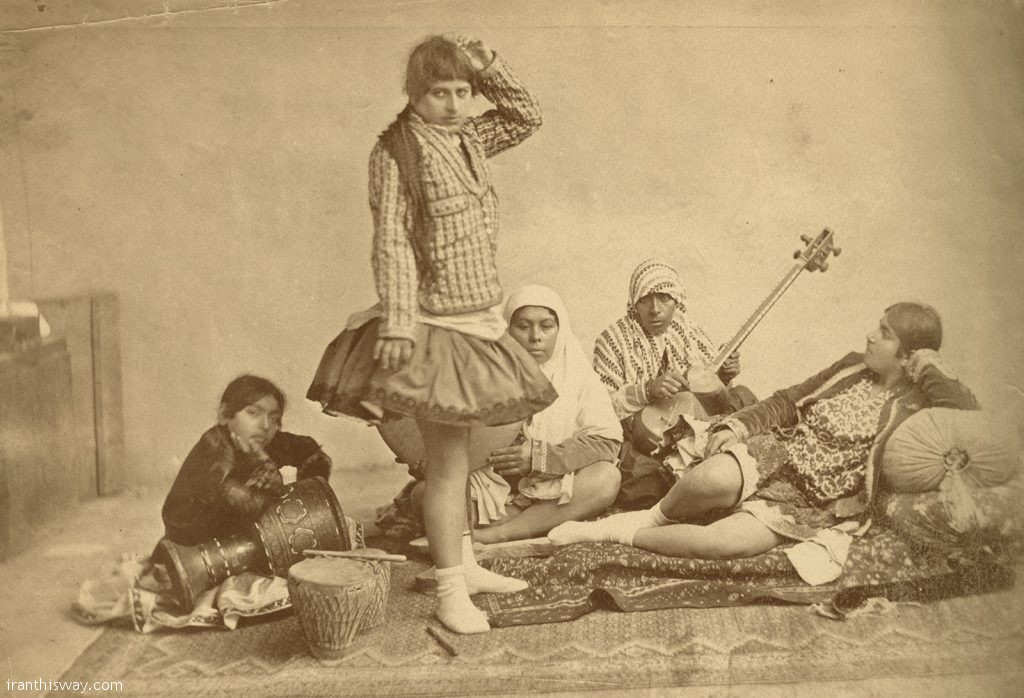 The 19th century Qajar King Nasser al-Din Shah was a great patron of music. He sponsored many great musicians, among them Mirza Abdollah Farahani who collated and organised the traditions of Persian music to form the basis of contemporary Persian traditional music known as radif. In 1862, a process of Westernization began when, Nasser al-Din Shah ordered the establishment of a military band, such as he had seen in Europe playing overtures, marches, polka, and waltzes. A French musician, Alfred Lemair, was hired to run a traditional ensemble of indigenous shawms, horns, trumpets, and percussion into a Western concert band. 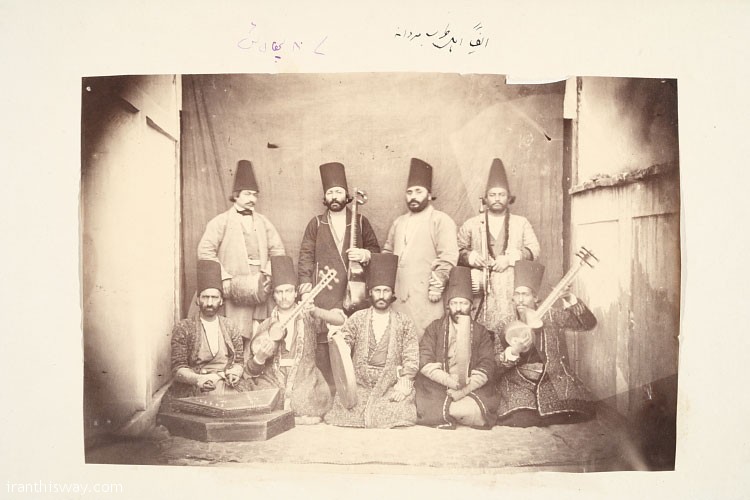 He was so successful that by the end of the 19th century, the music school in Tehran taught Western instruments and music theory. 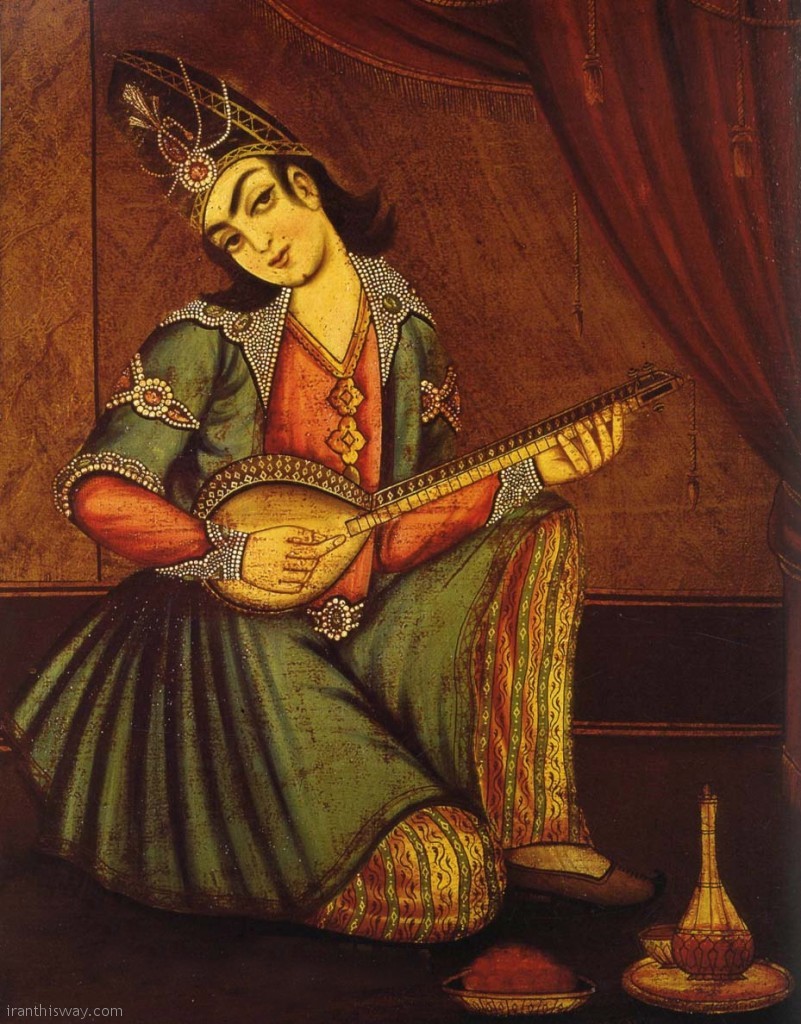 Westernization gathered pace with the accession of the Pahlavi dynasty in 1925. The Tehran music school (now a fully-fledged conservatoire) and the National School of Music were both state funded, and, in the late 1930s, a small symphony orchestra was founded. Iranian composers began to study abroad, and to compose in nationalist and modernist styles. By the 1970s, the Tehran Symphony Orchestra consisted of 100 players, and newly built concert halls were hosting international artists; music departments were instituted in universities, and television introduced Western music to the people. Pop, rock, jazz, and Latin American music gained popularity, and in their wake, the record and cassette industry marketed local pop music and hybrid love-songs that blended Persian modes with Western harmony.

Records and radio, and exposure to Western light music stimulated Persian music in its popular form. The traditional tasnif was reinterpreted in popular ballads, composed in Persian modes, but following the structure of Western songs. Often, the harmonic underlay was a mixture of traditional and Western instruments. In this form, it was commonly known as tarane – a 3-4 minute long song which was suited to the 78 rpm record. Traditional dastgah performances were similarly reduced in length, fewer modes were used in performance, and many were eliminated.

The Islamic Revolution to the Present

Many young Iranians have become interested in traditional music and the ban on Western music and even pop music has now been lifted. Today, music is taught in state-funded universities and many private institutions and classes throughout the country. Many Iranians play musical instruments, and the social standing of musicians is now much higher than in the past. 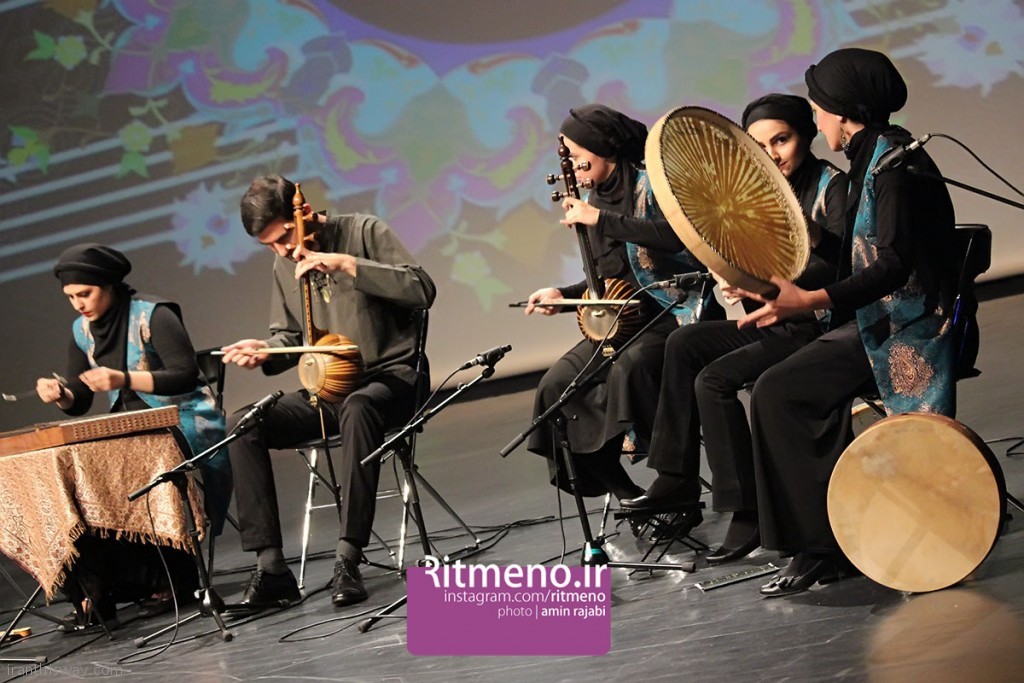