A festival in Markazi Province’s Khomein has featured traditional ceremony where weavers finish weaving carpet in special wooden frame, also known as ‘dar’ of the carpet. 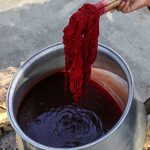 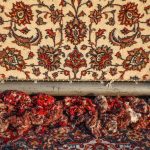 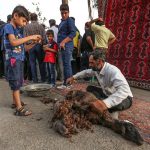 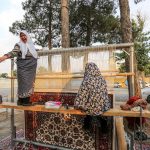 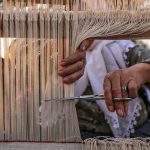 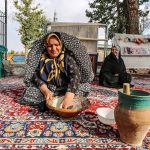 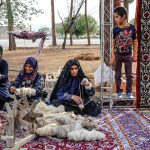 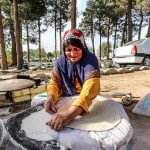 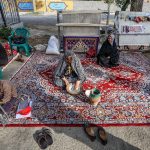 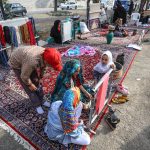 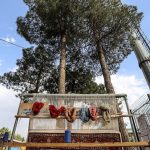 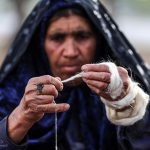 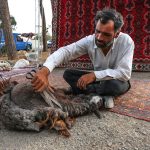 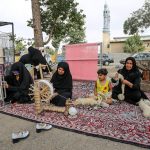 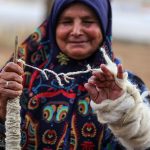 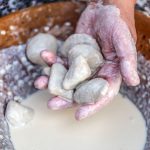 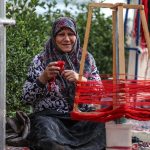 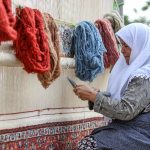 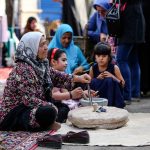 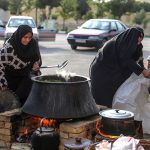 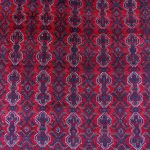 An Introduction To The History of Persian Carpet Weaving

Perhaps the history of carpet weaving starts when the first nomadic and tribal societies started to take shape on earth thousands of years ago. The need for comfort and warmth during seasonal changes and protection from climatic phenomenon forced the man to learn how to employ the most abundant raw materials that at that time were more readily available to him to answer his needs. Wool from herds of domesticated sheep and goats , cotton from the fields of early agricultural communities, and latter on silk , were the most available kind of materials to the inhabitants of western and central Asia during the early stages of civilization.

In the poetic book of Shah-Nameh , the Iranian epic poet Ferdowsi dates back the carpet weaving to the time of ancient Pishdadian Dynasty when Tahmureth, the third king of the dynasty , among other crafts, introduced the art of carpet weaving to his people. The Tabari Book of History also talks about carpets woven using animal hair and wool during the same historic era.

The oldest registered sign of carpet weaving dates back to the bronze age after finding a special knife used as a carpet weaving tool in a grave excavated by archeologists in northern regions of modern Iran .

Also archeological discoveries in Shahr-e- Sukhteh ( the Burnt City) situated in Sistan-Baluchestan province in south- eastern region of Iran, bear witness that the inhabitants of the city were well familiar with the weaving techniques in order to produce floor coverings for their homes and dwellings when the city was at the height of its flourishing era from 3500-2800 BC.

The Greek historian , Xenophon , mentions that the ancient city of Sardis was priding itself on its hand woven carpets ,decorated with the designs and motifs of mystical creature Lamassu and human figurines.

One of the oldest records of hand-woven carpet was found in the form of a bas-relief on the walls of an old palace in the historic city of Neynava located at the banks of river Tigris in Mesopotamia. But the oldest hand-woven carpet found so far, and remaining, is the Pazyryk Carpet. The carpet was discovered by Russian archeologists in their 1949 excavation of the tomb of a Scythian king in Altay mountains . The carpet, roughly sized 189×189 cm , using carbon-dating methods ,is dated back as far as 500-400BC and now is being kept at the Hermitage Museum in St. Petersburg, Russia. The experts believe it was made during the Achaemenian or Parthian rule in Persia ,as most motifs and designs of the carpet resembles those popular during the time of these two dynasties.

Other historic records and findings show the art of carpet weaving was popular among people of the ancient and historic city of Hecatomphylis (or Shahre-e Qumis)located in modern Central Iran province of Semnan.

But Perhaps Baharestan Carpet can be considered the most famous hand-woven carpet in the history of Persia. As mentioned by historians , it was a large carpet used in the court of the last king of Sassanid Dynasty . It is said that the carpet was woven, along with other regular materials, using silk, gold and silver threads and decorated with precious stones as well.

By the spread of Islam into the Persian Empire and starting from the first Hejri century ( about 637-651 ) prohibition of using human motifs and patterns due to Islamic teachings forced the Iranian carpet weavers to develop and innovate new patterns and designs mostly based on floral and geometric patterns and thus starting a new era in weaving of Persian hand woven carpets.

During the time of the Abbasid caliphate ( 750 – 1517 AD) a growth in tendency towards more luxuriant and palatial life style prompted a growing taste for more decorative and luxurious carpet designs and makes .The famous Arab explorer of 14th century, Ibn Battuta, also remarks about the glamour and grandeur of the Persian hand woven carpets he encountered during his travels to the court of Ilkhaniate viceroy of Khorasan province , Ghazan Khan, and the glamour of carpets used at the holly shrine of Imam Reza (PBUH) , in the city of Mashhad in north-east of Iran.

There has also been mentioning of large carpet weaving workshops in the city of Sabzevar in Khorasan region, during the reign of Theimorit rule and the use of miniature drawing technique by Iranian designers of the time.