Iran’s super heavyweight weightlifter Behdad Salimi, while beating the world record in snatch, failed in his three clean and jerk attempts dropping out of Rio Olympics.

Men’s over 105 kg weightlifting division in 2016 Summer Olympic Games began on Wednesday at 2:30 AM Tehran time in Pavilion 2 of Riocentro where 11 lifters were competing in the super heavyweight class.

Eager to defend his Olympic title, the Iranian athlete lifted 216 kg only a few seconds after Lasha Talakhadze of Georgia had overcome 215 kilograms to set a new world record.

All ready for the clean and jerk part, London Olympic gold medalist managed to get 245 kilos up over his head in the first attempt though he received two of three red lights from the judges on the grounds that he did not fully complete the lift. In his second attempt though he lifted the same 245 kiograms again for which he recieved three OK white lights by the judges, only when his lifting was surprisingly rejected by the jury.

Now bitterly upset by the judges’ decision, Iran’s Salimi failed in his third successive try for he had no more energy.

While being warmly applauded by Iranian and many other spectators, Iran’s super-heavyweight weightlifter waved his hand at the judges to express his disagreement with their ruling before leaving the stage with almost tearful eyes.

Salimi, together with his coaches, approached the judges table for several times to voice their dissatisfaction though the complaints were not addressed by the jury panel.

Much to Iranians’ chagrin, President of the International Weightlifting Federation and a member of the International Olympic Committee Tamás Ajánthe, who was standing near the judges’ table all through the event and had witnessed Salimi’s attempts, merely responded to the protest of Iranian reporters who accused him of forcing the jury to reject Salimi’s lifting with a ‘goodbye!’ remark.

Meanwhile, Salimi’s failure in clean and jerk had opened the door for Georgia’s Talakhadze who secured the gold medal by lifting 247 kilograms. Enjoying a great deal of confidence in his number three try, the now-rivalless Georgian lifted 258 on the clean and jerk to set a new world record in the over 105-kilogram weightlifting category with a total of 473 kilos.

Gor Minasyan of Armenia bagged silver with a total of 451 kilos and Georgia’s Irakli Turmanidze stood on the bronze podium with 448 total kilograms. /MNA 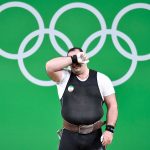 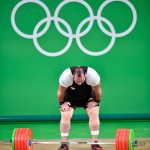 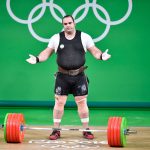 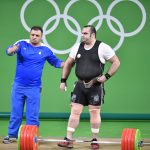