Rudkhan castle is one of historical buildings in Gilan located on the crest of a mountain and is called by locals “Zhiyeh Castle”. The castle has been alternatively called “One Thousand Steps”, “Hesami”, and “Saksar” castle too.

The important historical castle has been the seat of Gilan governments for a long time. It is said to date back to the Sassanid period and after destruction, it has been rebuilt under the Seljuk rule. It was a base for Ishmaelite clan and was used by local rulers up to the Zand dynasty. Thereafter, it was abandoned. The exact date of its construction, however, is still a mystery. Since Fouman has been the seat of Gilan government for a long time (after Eshaqvand dynasty) the castle has gained more in importance. Unreliable stories have it that Mirza Kouchak Khan Jangali has taken shelter there for a period of three years. There is a plaque on its entrance which reads, “This castle has been built for Sultan Hesamoddin Amir Dabbaj between 918 and 921 AH”.

The castle is located 25 km southwest of Fouman City, which is part of Gurabpas Mountains, The castle has an area of 2.6 hectares and is located on the heights overlooking Rudkhan village. The castle is 665-715 m from sea level and is near the Rudkhan River. Its wall is 1,500 m long and the castle has 65 towers.

Rudkhan castle has an area of over 2.4 hectares long with 42 watchtowers. There are loopholes in the thick wall of the castle through which molten metal was poured on assailants and through which archers targeted the enemy. In the past, there has been a spring inside the castle, which was used by the inhabitants when they were under siege. 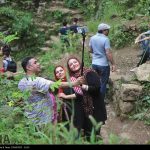 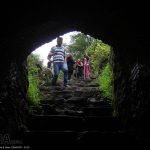 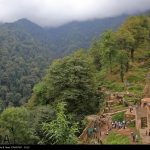 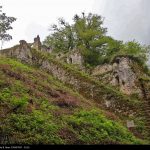 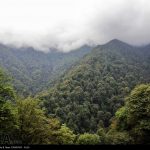 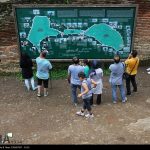 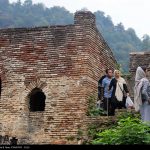 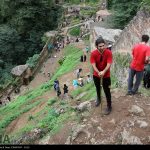 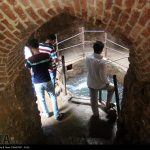 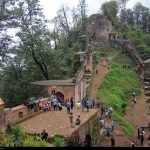 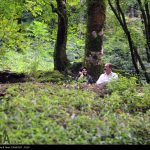 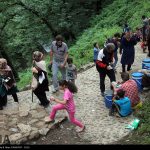 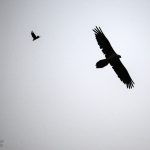 A citadel where the king and his harem lived.
Barracks for soldiers.

On the eastern side of Rudkhan castle, there are ruins. The wall encircling the castle and watchtowers can be seen to the north and south of the castle Octagonal rooms made of brick are seen on the topside of the castle.

The eastern wing is smaller than the western wing and includes 12 entrances, a prison, an emergency exit, bathhouse, water closet, and a number of residential units. The bigger western wing includes 12 entrances, a spring, water pool, water storage facility, bathhouse, water closet, the king’s seat, and a number of residential units which are encircled by a wall. The citadel is located on the west wing of the castle and has two stories. It is made of brick.

The castle was never conquered by assailants and this shows how skillful its architects have been, either in terms of military science or architecture. At the first sight, every visitor would notice its huge drawbridge and magnificent tower. The main gate is flanked by two guardhouses.

Entrance of the gate has five platforms made of stone which are one meter high. Water storage facility is located at the west wing with a five-meter door made of stone which is 2 m wide. It is located beneath the lowest level of the castle, 140 m away from the entrance gate and is shaped like an octagonal each side of which measuring 2 meters.

An interesting feature of this huge castle is a cobble-stoned staircase among forest trees and you can hear birds singing while going up them. That staircase has been built by Gilan Province Cultural Heritage, Handicrafts and Tourism Organization.