A comprehensive document for bilateral maritime transport and port cooperation was signed between Iran and the Netherlands.

The deal was sealed by Iran’s Minister of Roads and Urban Development Abbas Akhundi and Minister of Infrastructure and the Environment of the Netherlands Schultz van Haegen. 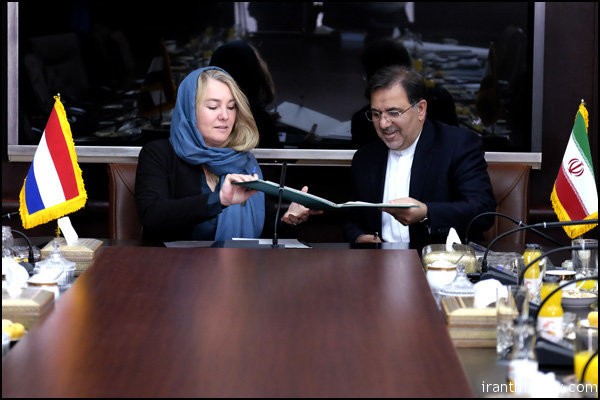 During the MoU-signing ceremony, Schultz van Haegen of the Dutch ministry said the two countries ink the deal with the aim of strategic development of maritime and port activities noting “the agreement holds great significance given the role played by both parties in their areas of jurisdiction.”

Iran’s Akhundi, for his part, pointing to the joint Memorandum of Understanding (MoU) between Tehran and Amsterdam asserting “the Netherlands remains as a major European country in the field of maritime transport as a great portion Europe’s maritime transport is carried out through Dutch ports.”

“The main axis of talks between the two states in the field of transport marks use of existing facilities to enable maritime logistics between Iran and the Netherlands,” he underlined adding “negotiations were held over development of Phase 3 of Shahid Rajaee Port as well as Chabahar port for the Dutch side to take part in Iran’s port tenders in case of willingness.”

The Iranian minister further pointed to the held talks over road transport adding “presently no MoU exists between the two sides though Iran has made a proposal for study to the Dutch minister and the results would hopefully lead to an agreement in future.”

“Currently, a total of 800 Iranian trucks commute to the European country and the draft of an MoU has been inked,” he maintained.

Minister: Iran-Netherlands flights in recent days stating that the first KLM flights was performed and direct flights will hopefully be boosted in near future.

Abbas Akhundi also touched upon resumption of Iran-Netherlands flights in recent days stating that the first KLM flights was performed on Sunday and the number of direct flights will hopefully be boosted in near future.”

“Iran requires comprehensive cooperation with the Netherlands in order to restore new corridors between Europe and the East,” commented the official.

It is worth noting that the recent MoU between Iran and the Netherla.nds was inked in Tehran and covers several areas including bolstering of port and maritime ties, investment, formation of a joint committee, exchange of experts, training of managers as various levels, practical measures as well as development of logistic procedures.