Iran Mercantile Exchange (IME) announced that commodities valued at about $1.045 billion and weighing over 1.943 million tons were traded in its domestic trading and exports halls in February.

The exchange transacted in nearly 1.115 million tons of oil and petrochemical commodities valued at $556 million during the month, Fars News Agency reported.

Also its agricultural trading hall dealt in 90,000 tons of agricultural products worth $45 million in September. 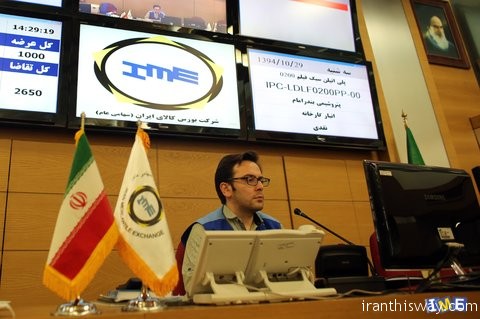 The IME added that 727,000 tons of metal and mineral products worth more than $442 million were traded in its domestic and export halls.

The IME was set up on September 20, 2007 in accordance with Article 95 of the new law of Securities Market of the Islamic Republic of Iran following the merger of agricultural and metal exchanges of Tehran. The merger marked a new chapter in Iran capital market providing endless trading opportunities for customers both at home and abroad.

Various economic and industrial sectors benefit from the exchange. The IME currently offers various services, including:

Performing as the first market providing access to the initial offering of the listed commodities in the IME,