The first debate among the six candidates of the 12th Iranian presidential election has been aired live on state television.

The candidates outlined their plans for the post. They were given an equal time to garner as many votes as possible in order to win the ticket to the office.

The live broadcast, which lasted for three hours, aimed to reduce the candidates’ campaign spending and pave the way for eligible voters to make their choice based on the sharp-cut and unambiguous plans represented during the program.

Iranians will go to the polls on May 19 to elect the country’s next president.

Upon entering the headquarters of the Islamic Republic of Iran Broadcasting (IRIB) in the capital, Tehran, Rouhani was asked if he was ready, to which he responded, “We’re probably all ready that we have come [here].”

Meanwhile, Mehr news agency reported that the debate had been put off half an hour to 16:30 local time (1200 GMT) upon the request of Rouhani’s camp.

Morteza Heidari, the renowned Iranian television news host and presenter who moderated the debate, also said he was prepared for the task and everything had been rehearsed

There will be three live televised debates in total. Today’s debate focused on social issues while the next two will revolve around economic and political matters.

The candidates have drawn lots to determine their seating arrangement for the debate. Every effort seems to have been made not to leave any room for accusations of partiality.

According to schedule, Fars News Agency reports, the candidates can hold a meeting of 15 minutes with the aides and advisors after 90 minutes of debate.

The debate began with Heidari outlining its format and regulations and how the time would be broken up between the candidates.

Settlement on outskirts of cities

Aqa-Mirsalim was the first candidate to answer the first question about settlements on the outskirts and peripheries of cities. This too was determined through a draw. Aqa-Mirsalim expressed his serious concern about lack of management of natural resources. He said correct water management would be the first step to reduce immigration from rural areas to cities. He added that lack of attention to proper spatial planning was the main reason behind immigration.

The other five candidates then took two-minute turns to make their own remarks on the issue and challenge Aqa-Mirsalim.  Hashemi-Taba said Iran is plagued with severe environmental crisis. The third hopeful, incumbent Rouhani, said that immigration to big cities is a major problem not only in Iran but in most countries. He added that unemployment and low income are major reasons behind immigration to big cities. Qalibaf, for his part, said social and economic imbalance is a major reason behind immigration. Jahangiri said attention to immigrants to big cities must be the first priority in tackling their problems. Raeisi said the first priority is to have correct figures on immigration to big cities. While Qalibaf put the number of outskirts dwellers at 11 million, Raeisi said the figure belongs to four years ago and currently stands at around 16 million.

Aqa-Mirsalim then retook to the podium and said immigration should be curbed before it gives rise to social crises and added that 350,000 illegal wells have wasted the country’s water resources and caused immigration. The candidate said social facilities must be distributed evenly in cities and villages and expressed regret that some 10.2 million Iranians are totally illiterate. He noted that suitable housing must be provided in small towns and villages to prevent immigration.

Raeisi was next up on the podium. He responded to a query on social justice and how to establish and promote it in Iran. In the four minutes allocated to him, Raeisi said the GINI Index, a measurement of the income distribution of a country’s residents, shows class divide has increased in Iran, adding that tripling subsidies handed out to lower classes would be a good way to narrow the social gaps. He noted that tax evasion must be prevented to promote social justice.

Rouhani stressed the importance of striking a balance between eastern and western parts of the country. Qalibaf said promoting social justice would be difficult as long as urban crises are not resolved. Jahangiri said social justice is not limited to economic issues but also includes education, political and judicial matters.

Raeisi one again took to the podium to give his responses and explanations about questions raised by the other hopefuls. He said joblessness and shutdown of production units are major problems facing the country’s economy. He added that the next administration must make plans to narrow social gaps in a bid to promote justice.

Hashemi-Taba was the third candidate who took to the podium to responsd to a debate question about his plans to solve the country’s housing problem. He said bank loans and mass construction would be good ways to tackle the housing problem, adding that job creation would help resolve this issue.

Jahangiri said unoccupied housing units are the main obstacle to solving the housing problem and added that increasing bank loans and establishing housing investment funds would be good solutions to this issue.

Hashemi-Taba then retook to the podium and used his five-minute time to answer the raised questions.

Raeisi said banking facilities, housing and employment are the main necessities to promote marriage among young Iranians. The other candidates also offered their viewpoints with Qalibaf challenging Rouhani on an alleged pledge that Rouhani had made during the previous presidential campaign to create four million jobs. Rouhani denied ever making that promise.

Cutting down on red tape

Jahangiri was the fifth presidential candidate to use his four-minute time to outline his plans on reducing bureaucracy in executive bodies. He said the current administration has managed to change the security-based approach to social issues and added that most of the Iranian people are not satisfied with municipalities and banks. The current first vice president said the establishment of an e-government was the major step to reduce bureaucracy.

Raeisi said an electronic government would increase transparency and facilitate the administrative processes. Rouhani said some media outlets undermine the social capital in the country. In this segment, Qalibaf questioned the reason behind Jahangiri’s candidacy, implying that Jahangiri has only registered to support Rouhani.

Jahangiri said forceful measures would fail to solve social problems and added that he took part in the presidential election as a representative of the Reformist camp. The current first vice president emphasized that the 11th administration has managed to increase petrochemical production by nine million tonnes.

Qalibaf was the last hopeful taking to the podium to answer a question about his plans to tackle the environmental challenges if elected president. He said the dust storm problem is currently plaguing 20 Iranian provinces and added that inappropriate measures taken inside the country has led to this crisis.

Jahangiri said the current administration has succeeded in taking essential measures to solve the environmental problems. He added that 70 percent of the dust storm problem stems from reasons beyond Iran’s borders.

Qalibaf defended the performance of Tehran Municipality in the environment-protection sector, saying it has used garbage to generate power and produce compost. The mayor of Tehran added that over 20,000 hectares have been planted with trees around the capital.

With all the six candidates having taken to the podium, the moderator announced the end of the first section of the debate and called a break before the beginning of the second round. 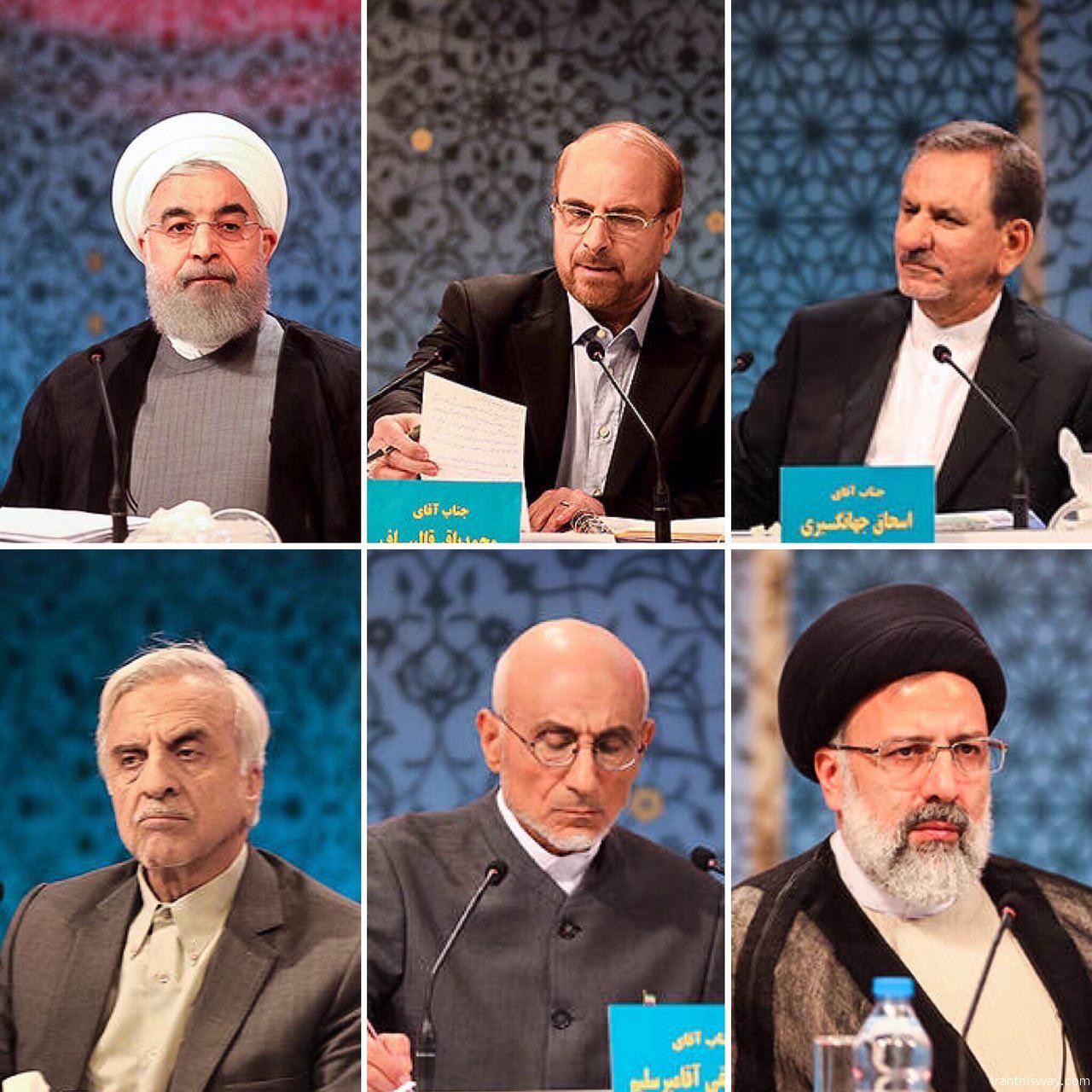 In the second section, each candidate was given two minutes to answer a question raised by the moderator. Draws determined the candidate and the question that he answers.

Rouhani explained his plans to promote employment for women, saying his administration has managed to create 700,000 jobs for women. He added that women account for over 50 percent of university students in Iran.

As per the draw, Aqa-Mirsalim next responded to a question about his plans to solve the heavy traffic problem in big cities and said giving priority to public transport would be the best solution to the issue.

Jahangiri was asked about his plans to boost the social status of the elites. He highlighted the fact that Iranian elites have greatly increased the country’s scientific ranking in the world.

Raeisi responded to a question about his plans to promote the culture of sportsmanship and said winning medals in sports is very important for the country.

Qalibaf and Hashemi-Taba also in turn provided answered to the questions posed to them. In this section Qalibaf displayed a screenshot of the Iranian president’s website which he claimed confirms his remarks about Rouhani’s pledge during the previous campaign to create four million jobs.

The next and final section of the debate involved each candidate providing their concluding remarks. This section involved a verbal back and forth between Qalibaf and Rouhani over some of the claims against the latter by the former throughout the debate.