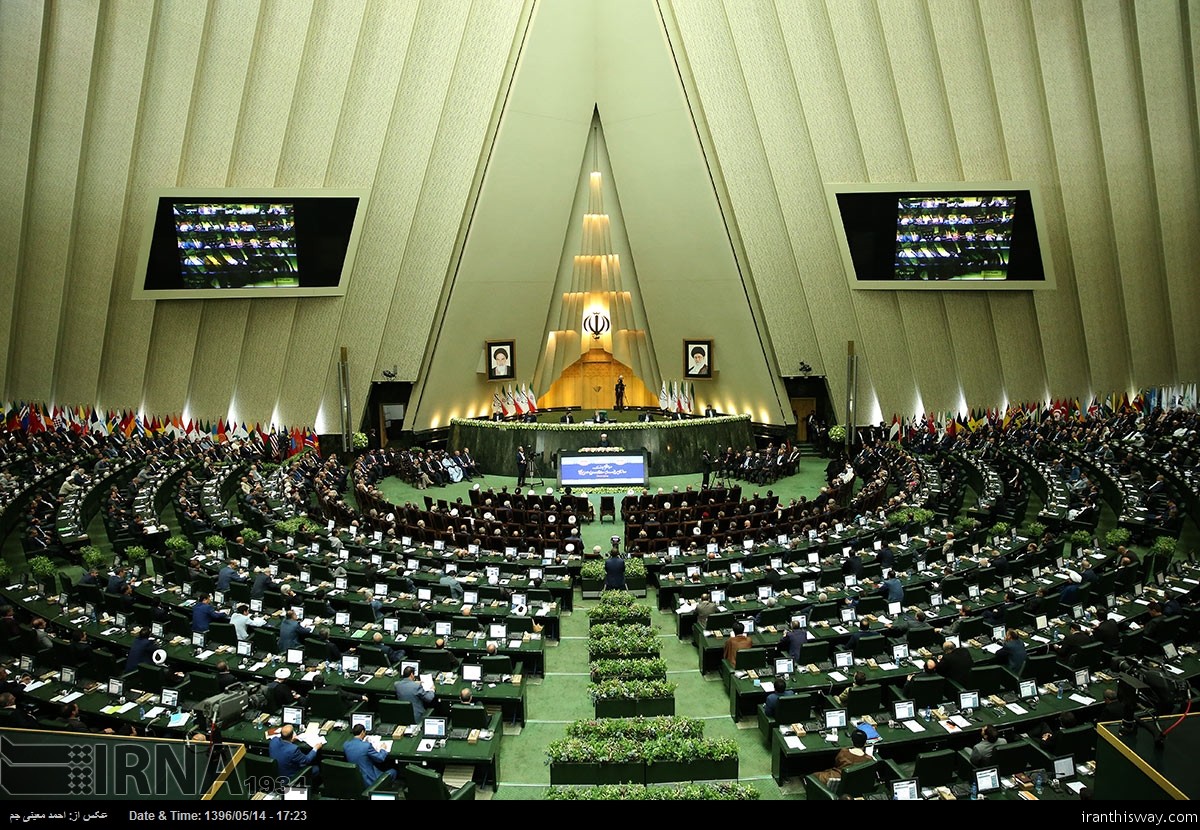 Hassan Rouhani has been sworn in as Iran’s 12th president in the Iranian capital in the presence of the country’s high-ranking officials as well as leaders and senior politicians from around the world.

The inauguration ceremony opened at the Parliament building in Tehran on Saturday with delegates from more than 100 countries, including several heads of state, partaking in it.

After the anthem of the Islamic Republic was played and verses of the Holy Quran recited, Iranian Parliament Speaker Ali Larijani kicked off the ceremony in earnest by welcoming all the participants, particularly the foreign dignitaries.
He said the participation of more than 72 percent of the Iranian people in the presidential election showed that they are dedicated to the Islamic establishment. 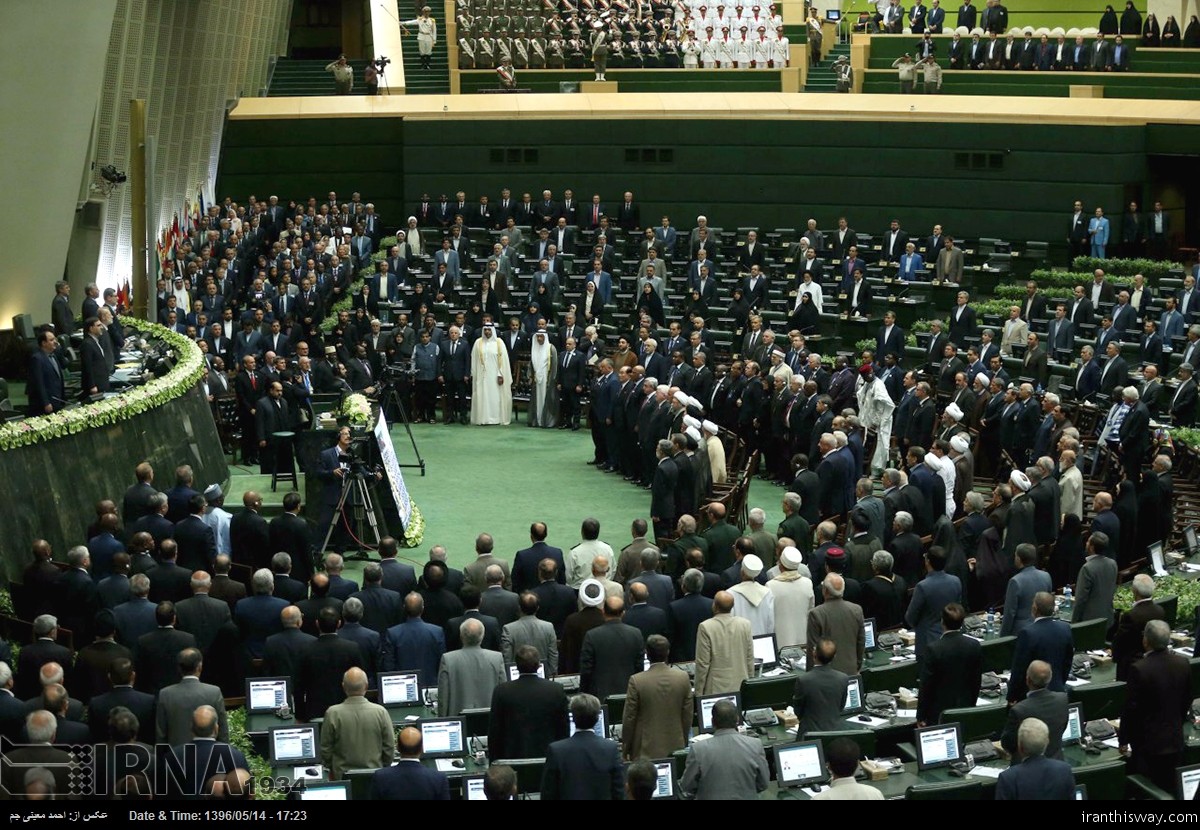 The top Iranian parliamentarian added that the Parliament would support any effort by the next government to remove obstacles in the way of increasing national production and foreign and domestic investment.
Judiciary chief Ayatollah Sadeq Amoli Larijani was next at the podium to deliver his speech. He said that the Iranian nation has shown that it supports the 1979 Islamic Revolution. 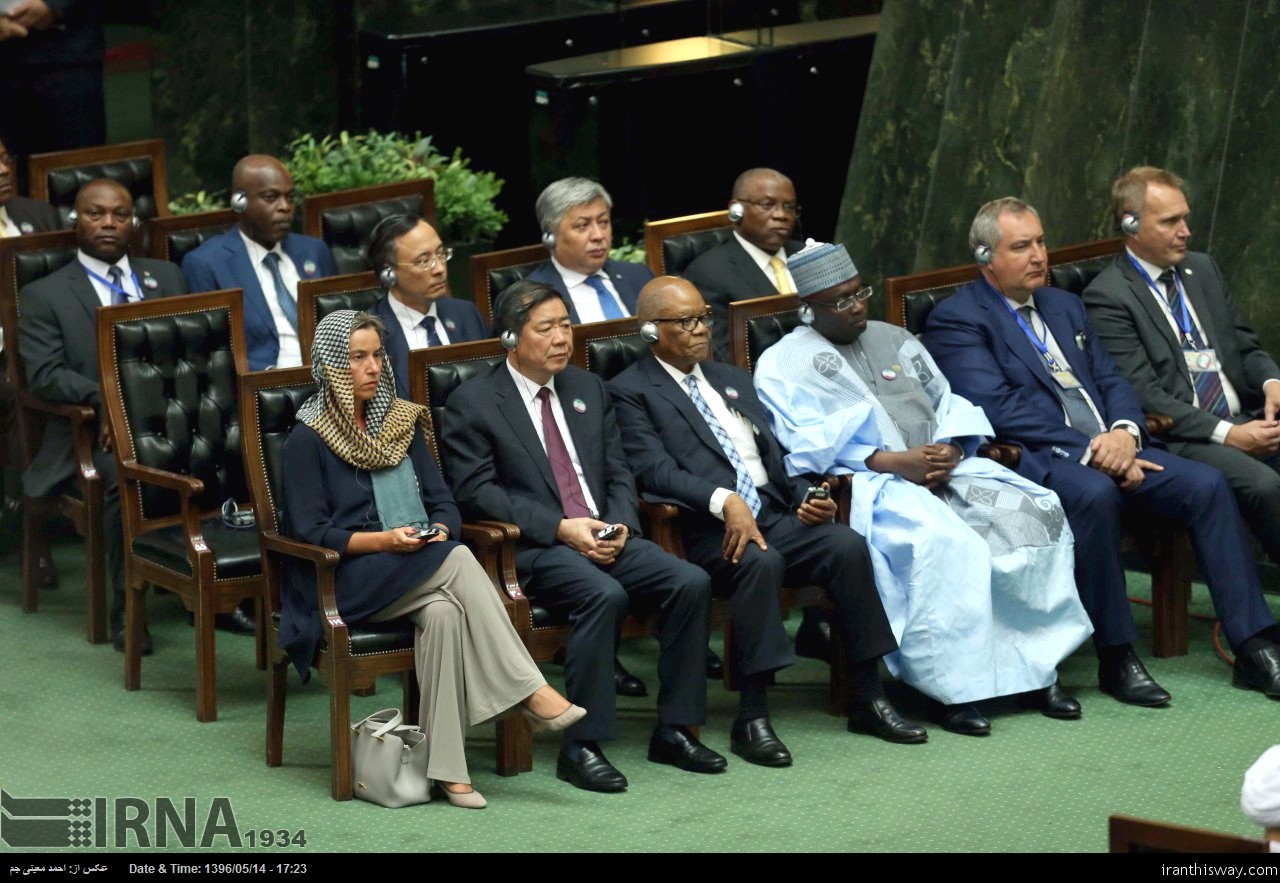 Rouhani then took the oath of office and proceeded to his speech.

ddressing the ceremony, Rouhani thanked world leaders and dignitaries for taking part in the swearing-in ceremony.

He said the Iranian nation has made great sacrifices in the path of safeguarding freedom and the rule of law, adding that Iranians have put their trust in the Islamic establishment.

He vowed to follow the Iranian nation’s demands and emphasized that his government is ready to defend the country’s national interests.

The Iranian president referred to the landmark nuclear agreement, known as the Joint Comprehensive Plan of Action (JCPOA), signed between Iran and the P5+1 group of countries as an example of national consensus on important issues.

Rouhani said the US has not adhered to its obligations under the JCPOA, stressing that Iran would never initiate the violation of the nuclear deal but would not remain silent in the face of US non-performance of the deal. 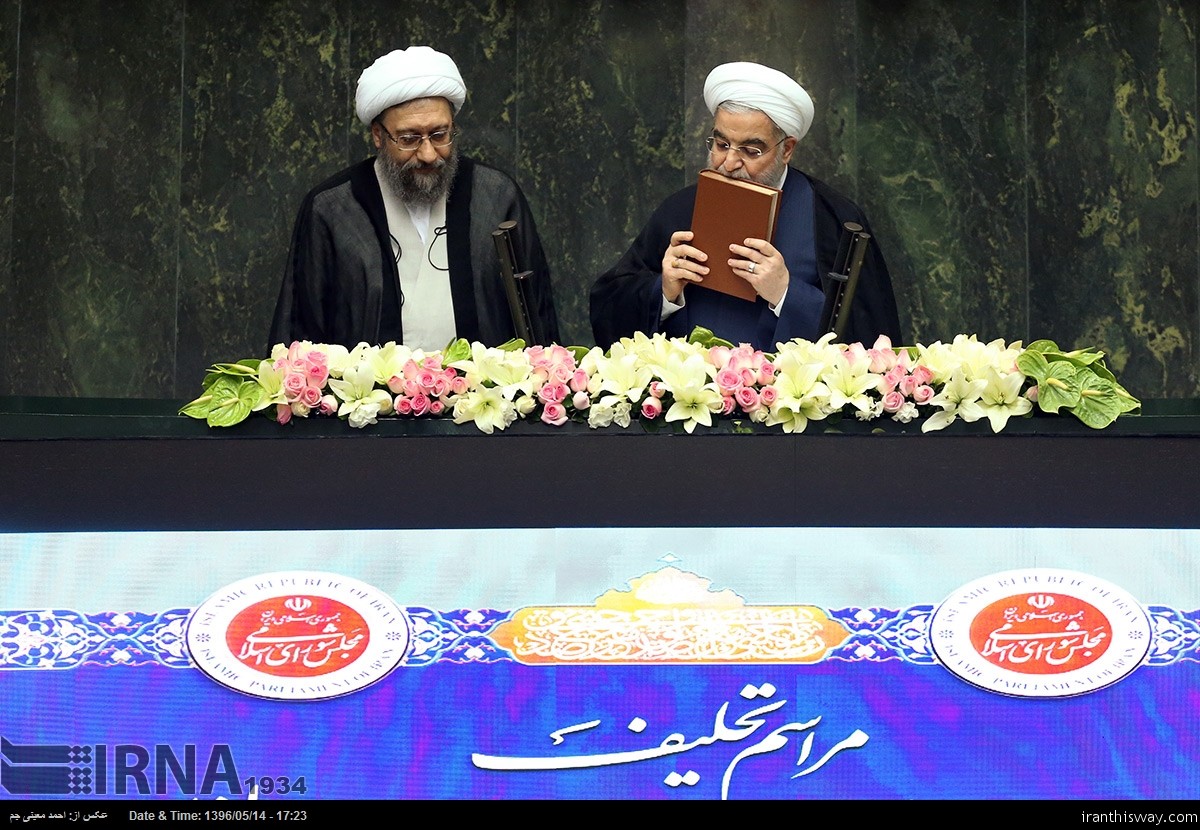 He emphasized that the Iranian government and people would react to any breach of the deal.

He said the US has failed to fulfill its obligations under the JCPOA because it is “addicted to the illegal and ineffective policy of sanctions and threats” and this proved to the world that Washington cannot be trusted.

He emphasized that the time of imposing sanctions has ended and called for holding negotiations in dealing with issues.

He said the Iranian government has taken great steps to improve nation’s health, adding that the level of education and health in Iran is better than many other countries.

Iran; however, is still facing big challenges including water shortage and unemployment, he noted.

Rouhani stressed the importance of a strong economy in the country and said the next government eyes economic reforms.

The Iranian president also said the Islamic Republic would continue to defend the oppressed nations throughout the world.

He described unity as a key factor behind the Iranian nation’s success and added that Tehran seeks to boost ties with neighboring countries.

The Iranian chief executive said regional problems could be solved only through dialogue and cooperation and invited countries in the region to join political initiatives to end the crisis in Yemen.

He stressed the importance of increasing dialogue among governments and nations in order to repel the present “dangerous and complicated” threats.

“[Increasing] constructive interaction with world countries, deepening bonds with neighboring and regional countries and boosting the level of cooperation with friendly countries are not only a wise choice but a necessity,” Rouhani said.

He warned of plots by foreign powers pursuing their self-interests in regional issues, saying they are creating chaos and instability in the Middle East.

After Rouhani’s speech, Ali Larijani wrapped up the session by urging Rouhani to present his Cabinet choices to the parliament at the earliest for their confirmation hearings to be held.

Rouhani won re-election in a landslide victory in May after securing 57 percent of the votes and defeating his main contender Ebrahim Raeisi, the current custodian of the Holy Shrine of Imam Reza (PBUH). 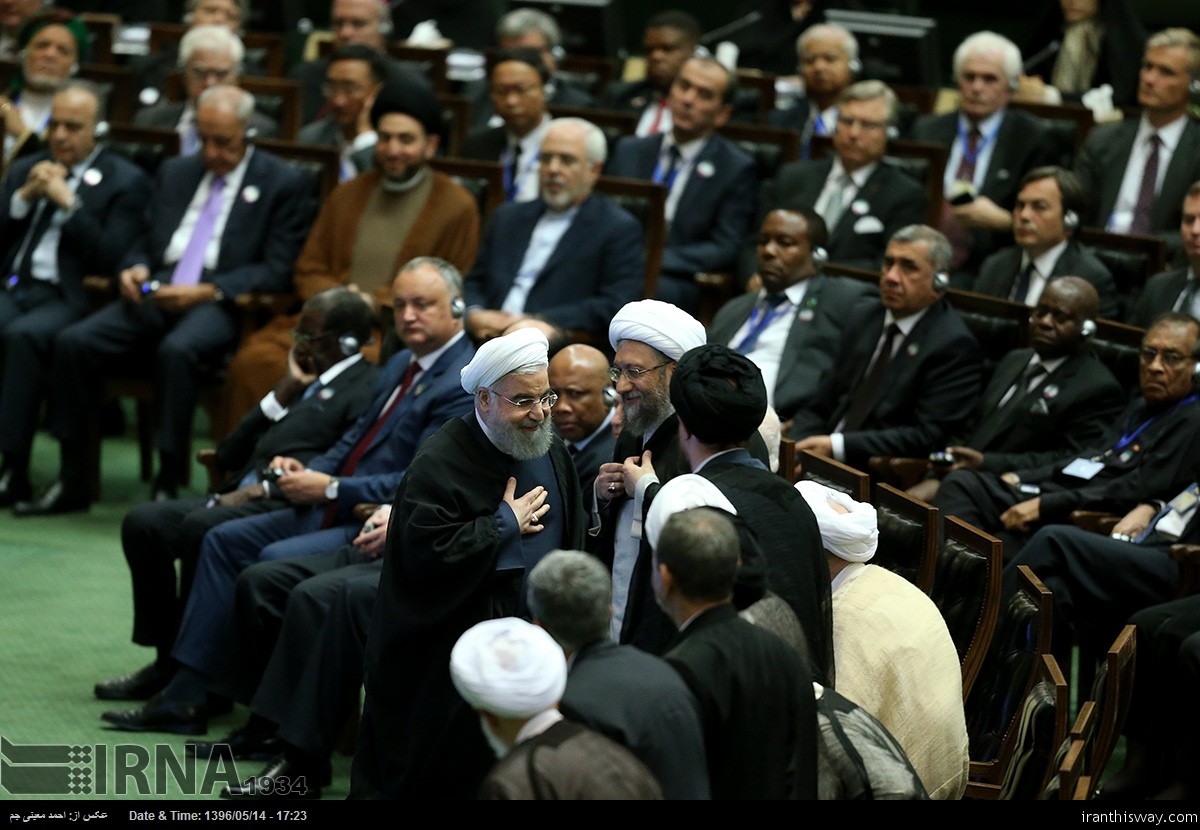 On Thursday, Leader of the Islamic Revolution Ayatollah Seyyed Ali Khamenei formally endorsed Rouhani as president for the second term.

During the ceremony, Ayatollah Khamenei gave his official approval for the president-elect by giving him a decree assigning him his duties.

Under Iran’s election law, the president-elect is required to gain the Leader’s official approval before being sworn in before the Parliament. Through this process, called Tanfiz (endorsement), the Leader approves the outcome of the presidential election.

Rouhani will have two weeks to present his cabinet to the Parliament for a vote of confidence.