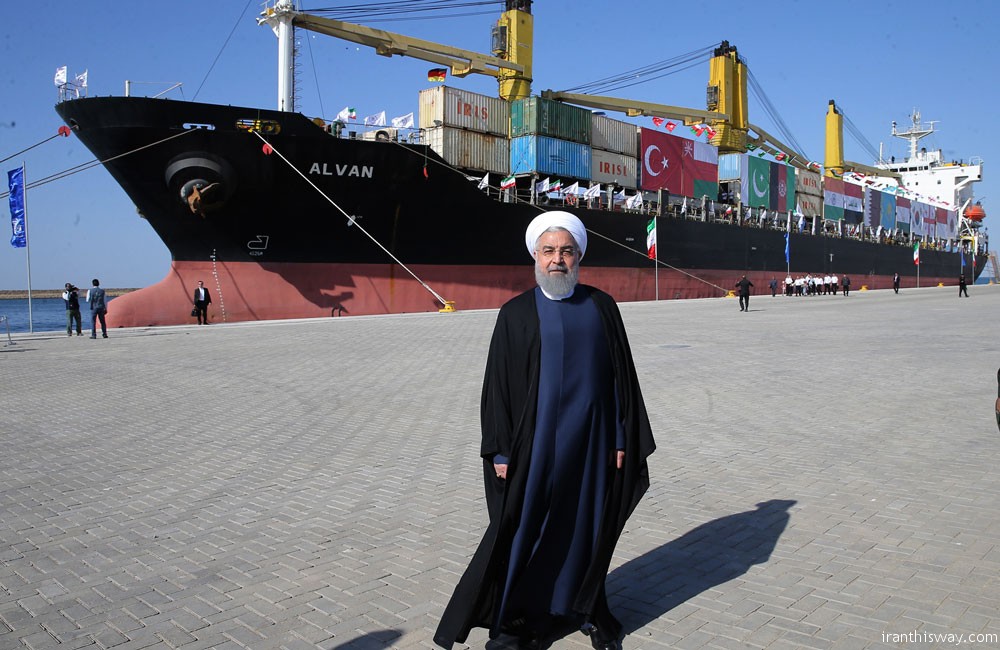 Iran has launched the first phase of a strategic southeastern port which it expects to open a multi-modal trade corridor connecting India to Central Asia.

The first phase of Shahid Beheshti International Port in Chabahar, Sistan-Baluchestan Province, was inaugurated by President Hassan Rouhani during a ceremony also attended by officials and dignitaries from 17 countries.

President Rouhani said during the ceremony that the inauguration of the project marked a historic day for Iran – particularly for the people of Chabahar.

He emphasized that the project was specifically important given that it connected the trade corridors that pass through Iran to the ocean.

“This port is also significant from the political point of view given that it connects Iran with its eastern and northern neighbors and at a later stage to European states,” Rouhani said.

The project to develop Shahid Beheshti Port started in 2007 through an investment that officials previously said already amounted to $1 billion.

The annual cargo tonnage of Shahid Beheshti Port – Iran’s only oceanic port – has now almost tripled to reach as high as 8.5 million tonnes.

The overall development project is planned in four phases and is expected to bring the port’s total annual cargo capacity to 82 million tonnes.

Tehran plans to use Chabahar for transhipment to Afghanistan and Central Asia.

India, Iran and Afghanistan have signed an agreement to give Indian goods, heading toward Central Asia and Afghanistan, preferential treatment and tariff reductions at Chabahar.

Chabahar provides India with an easier land-sea route to Afghanistan. The Indian government has committed $500 million to Chabahar, with an aim to join an increasingly important transport corridor to resource-rich regional countries.

Massive investment plans are already on the cards, with the government of Prime Minister Narendra Modi offering to build a sprawling artery of roads and railways which is estimated to cost $15 billion.

Once the development project is complete, Chabahar will be linked with the International North-South Transportation Corridor (INSTC), which currently stretches from the Iranian port of Bandar Abbas in the Persian Gulf to Russia, Eurasia and Europe.

Chabahar is the only oceanic port of Iran which lies on 645 km to the south of Zahedan, the provincial capital city. 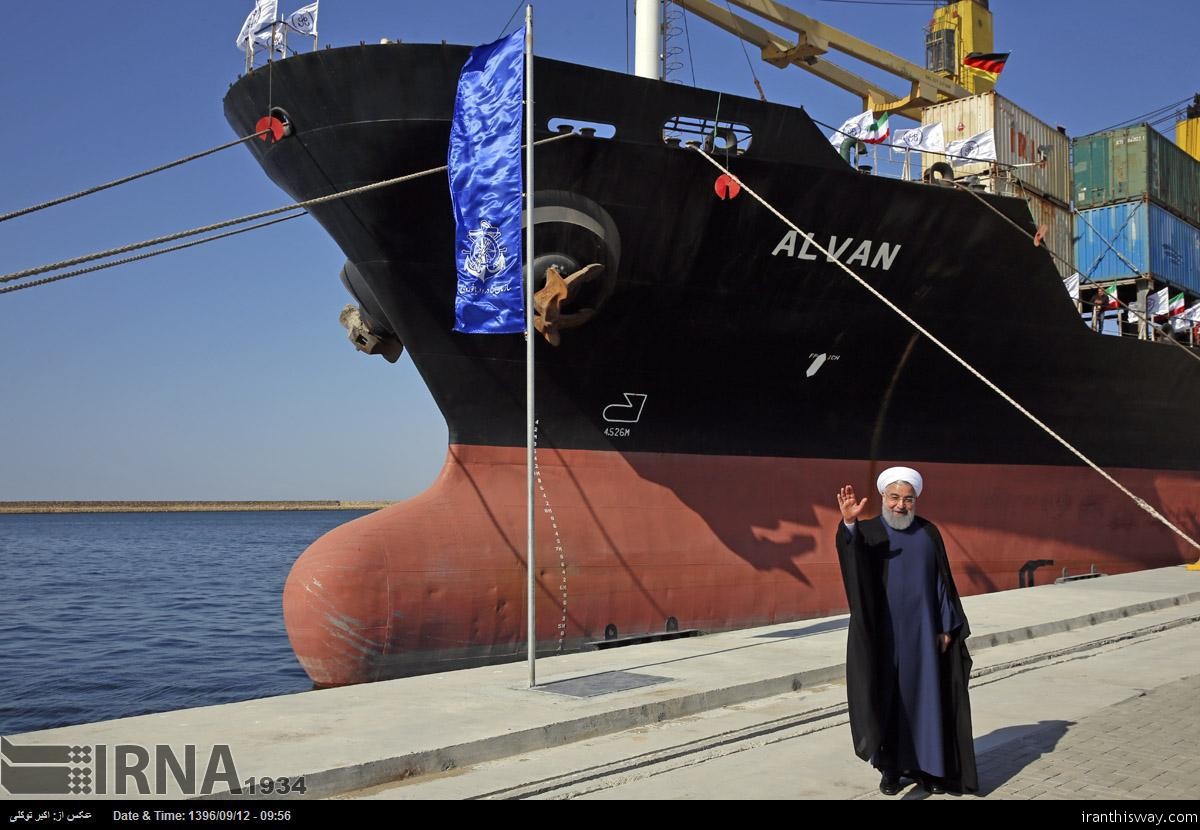 India’s Ministry of External Affairs described the inauguration of Iran’s Chabahar Port project as a golden opportunity for New Delhi to enhance its regional role and cooperation.
In a statement on Sunday, it referred to the visit of the Indian Minister of State for Shipping Pon Radhakrishnan to Iran on the occasion, noting that the ceremony was attended by ministers, ambassadors and senior officials primarily from countries of the region.

According to the statement, Radhakrishnan, during his two day visit on 2-3 December 2017, represented India in the 2nd meeting of the India-Iran-Afghanistan Ministerial-level Trilateral Meeting on Chabahar Port Development and involving the respective Ministers of Iran and Afghanistan. The inaugural Trilateral meeting was held in September 2016 in New Delhi.

It said that “in the Trilateral meeting with Iranian Transport Minister Abbas Akhoundi and the Afghanistan Trade and Commerce Minister Humayoon Rasaw, the three sides reviewed and positively assessed the progress in the development of Chabahar Port and reiterated their commitment to complete and operationalise the Port at the earliest that would contribute to bilateral and regional trade and economic development and also provide alternate access to landlocked Afghanistan to regional and global markets.

It added that the three sides also commended the recent joint efforts which led to the transit of first tranche of 110,000 tonnes of wheat from India to Afghanistan through the Chabahar Port.

The Ministers agreed to further intensify efforts on issues concerning regional connectivity and focusing on Chabahar Port development under the Trilateral Transit and Trade Agreement at the Trilateral Meeting.

The Indian minister expressed his positive appreciation to the Iranian side on the recent steps taken towards ratification by the Majlis of Iran on the Trilateral Transit and Trade Agreement signed in May 2016 between India, Iran and Afghanistan.

The completion of the internal procedures on the ratification process by Iran is expected to lead to full and early operationalisation of the Transit and Trade arrangement between the three countries though the Chabahar Port.

He said it is expected that a trilateral coordination meeting of senior officials will be convened at the earliest.

According to another statement, Sushma Swaraj, the Indian External Affairs Minister visited Iran on December 2, 2017 on her return journey from SCO Summit at Sochi to meet her Iranian counterpart Javad Zarif.

The two foreign ministers discussed the various aspects of India-Iran relations and ways to strengthen it.

They also positively reviewed the initiatives undertaken since the visit of Prime Minister Shri Narendra Modi to Iran in May 2016 including cooperation in Chabahar Port.

Both Ministers also exchanged views on regional and global developments of mutual interest.

The 2nd Ministerial level trilateral meeting between Afghanistan, India and Iran to discuss the implementation of Trilateral Agreement on Establishment of International Transport and Transit Corridor was held at Chabahar on Sunday.

President Hassan Rouhani opened the first phase of Shahid Beheshti Port in the southeastern city of Chabahar on Sunday morning during a ceremony attended by 60 foreign guests from 17 countries at the port located by the Oman Sea.

The port links India to Central Asisa and the Commonwealth of Independent States (CIS).