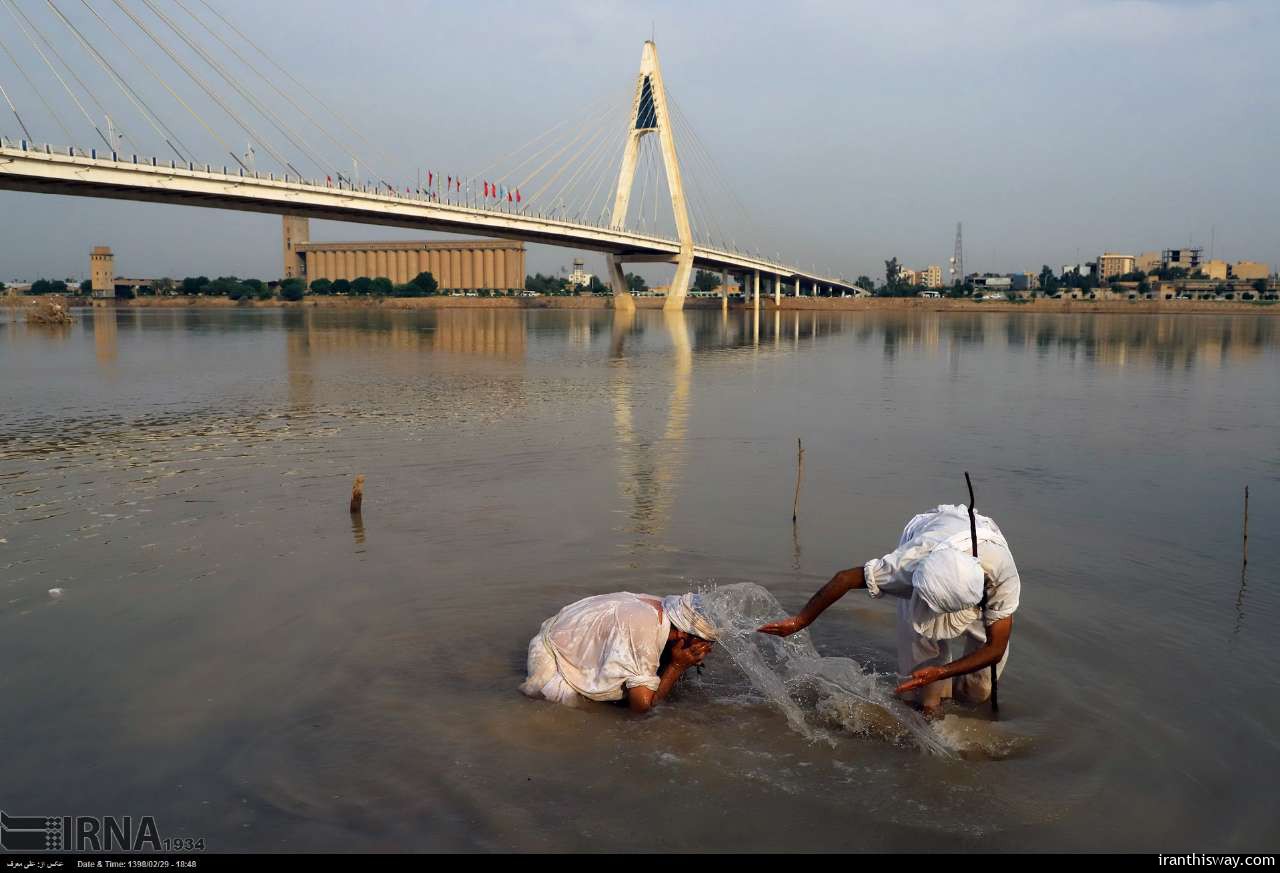 Historical Background
Mandaeans are also known as Sabian (in the Qur`an) and Subbi/Sobbi (in Arabic). Iranian Mandaeans speak Persian (Farsi) in addition to a localized Arabic dialect similar to the Arabic spoken in the southern region of Iraq.

Early scholars of the 1920s (M.J. Lagrange, R. Bultmann, Dane V. Schou-Pedersen, E. Yamauchi) debate the origin of Mandaeans, proposing them to be Jewish baptizing sects, Christian, or Babylonian – all in the Jordan area. More recently, Jacobsen Buckley argues that “…a consensus, based on linguistic and historical research, puts Mandaeism back into its original, “heretical” Jewish baptist milieu.” This argument is based on the linguist specialists’ argument based on the language used in their religious texts and the time and religious environment of John’s gospel. Jorunn Jacobsen Buckley firmly believes that Mandaeism never had a Christian stage. Popular legends describe Mandaean migrations. Buckley states that Mandaeans moved from their homeland under the protection of Ardban the Parthian King in the first century of CE, perhaps during the time of Ardban III.

Currently, Mandaeans live next to the Tigris and Euphrates rivers in Iraq as well as the Karoon River in the southern region of Iran (Khozestan), in the cities of Khorramshahr, Abadan, Ahvaz, Shushtar, Dezful, Shush, Chogha Zambil, and Howeizeh.

Mandaean Religious Beliefs
The religion is mostly classified with Gnosticism with certain elements such as yarna (running water), Kushta (truth), and Manda (knowledge) are directly connected to the religion’s Western origins. Mandaeans believe in Yahya, which is the prophet, John the Baptist. “Early on, the religion clearly experiences more or less hostile contacts with various forms of Christianity and becomes acquainted with Babylonian remnants, Zoroastrianism, Manichaeism, and other religions.” These influences and contacts with various religions that existed at the time of the Mandaean migration to Iranian regions are evident through direct borrowing of Manichaean hymns that are translated from Mandaean poetry. They believe that Miriai (Mary, mother of Jesus) becomes pregnant by witchcraft or by another man who is not her husband. The Jewess Miriai is
a Mandaean. Mandaeans believe that they are former Jews, and the language in the Talmud is the language of Babylonia that is very close to classical Mandaic (the language of Mandaeans). Miriai is a heroine but her son Jesus deviated from the truth and his Mandaean heritage. Mandaeans also believe that the punishment of the Jews is deserved.
The Mandaean holy book is called Ginza (treasure). It is separated into a right (Ginza Right/GR), and a left (Ginza Left/ GL).

GR contains materials, mostly in poetic style, related to the soul’s ascent to the Lightworld. GR is believed to be the oldest surviving text. When turning the Ginza upside down, one can read the GL, which deals with the fate of the soul when the body dies. Among other matters (such as the destiny of the soul, prayers), it contains the story of the first man who died, Adam’s son Sitil. The Mandaean story of creation has three different levels: the upper, Lightworld which is heavenly known as alama d-nhura or the world of light, a middle world which is the earthly world of human inhabitants known as Tibil, and the third world that is the dark and gloomy underworld. Most attention is paid to the Lightworld, which teaches that in the world above the supreme First Life lives and the true home lies above in the light. The supreme First Life is also known as the King of Greatness or the King of Light. Mandaean scripture describes two models of creation of the world: the first is an emanation model of creation and the second model is based upon the opposing poles of the Lightworld and the Darkworld. Buckley states that “…the emanation model is by far the most common, and the sheer mass of variations in the creation mythology makes it impossible to appoint one[,] specific version as ‘the original.’” Inhabitants of the Lightworld are known as utras (angels, guardians), who were involved in creation of the dark and light worlds and they continue to look after the earthly and Lightworld and keep in touch with Mandaeans of earth. The Lightworld sent prayers and all forms of rituals by the forces of light to be taught to the Mandaeans. Thus, the human world and the rituals and prayers connect the Lightworld. Therefore, the Mandaean must be concerned about how to live his life in Tibil, the earth, and how to die in order to receive a proper ascent to the Lightworld. The rituals connected with the Mandaean religion are complex and time consuming and a number of them cannot be performed by a lay person and require the assistance of a priest.

Status of Mandaeans in Iran
Mandaeans enjoyed protection by the kings during the later part of the Iranian Dynasty of Ashkanian, who ruled from 248 B.C.E. until their overthrow by the Sassanid Dynasty in C.E. 224). However, during the reign of the Sasanid ruler Bahram I in 273 C.E., religious persecutions were carried out regularly. Mani is executed in the early stages of Bahram I rule. The Zoroastrian high priest Karter suppressed followers of other religions such as Mandaeans, Manichaeans, Christians, Jews, Hindus, and Buddhists. “During these dangerous years, one might surmise a consolidation of Mandaean literature in an attempt to rescue and codify the religion.” At the early stages of the Islamic expansion, Mandaeans showed the Muslim authorities their holy book Ginza and proclaimed that John the Baptist was their prophet. This was crucial for Mandaeans to receive protection by their Muslim rulers, because they were aware that a holy book and a prophet are essential to gain the status of “People of the Book” (ahl al Kitab). In addition, Mandaeans cite the Qur`an for their existence in the holy scripture of Muslims. They are mentioned by the name of Sabians (II: 62, and V:72):

Those who believe (in the Qur`an),
And those who follow the Jewish (scriptures),
And the Christians and the Sabians ,
Any who believe in God
And the Last Day,
And work righteousness,
Shall have their reward.

Mandaeans enjoyed prosperity and freedom to practice their religion. Many scribal activities and collections of Mandaean texts exist at this time (mid 7th CE).
Mandaeans’ status as people of the book came into question throughout their history living in Iran. For example, Mandaeans under Qajar rule in the 1780s experienced difficulties by the Shah’s local representatives by throwing them into wells where they drowned. In addition to loss of lives due to cruelty of the local authorities, later in 1830 half of the inhabitants of the city lost their lives to the great cholera epidemic known as the Plague of Shushtar.

The most recent wars and crises in Iran and Iraq have caused migrations of large numbers of Mandaeans from both Iran and Iraq to the Western world. The Iran-Iraq war (1980-1988) as well the Gulf War of 1991 are responsible for a large population of Mandaeans dispersion around the world.

Varying statistics about Mandaean numbers range from 15,000-100,000 with the largest population still living in Iraq. Claiming religious persecution, non-recognition of their religion by the government of Iran, discrimination and exclusion from the normal protections of the law, a significant number of Iranian Mandaeans have fled to Australia.

Religious persecution in Iran, based on measured assessments, is on record by Amnesty International, including the following: in Iran all religious minorities, including Christians and Jews, suffer varying degrees of persecution, vis a vis the Shi’ite Muslim majority. The State, for example, does not permit non-Muslims to engage in government employment or to attend the university. And there are restrictions on the extent to which they can fully practice their religion, such as, for example, teaching it publicly. If injured or killed, Mandaeans or their dependents receive less compensation than would the Muslim majority, and they may suffer in assessments of their credibility as witnesses before Iranian courts. In recent years, Mandaeans who worked in any business requiring direct contact with food (such as cooking or baking or selling food items) have lost their jobs because they are viewed as “unclean” people. The discrimination against Mandaeans has increased since the start of Islamic Republic (1978).