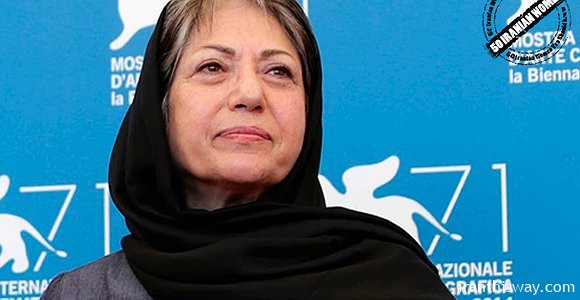 Iranian acclaimed film director and screenwriter Rakhshan Bani-Etemad was picked by the Internet Movie Database (IMDb) among the women whose work contributed to the history of cinema.

Celebrating Women’s History Month (March 1-31), IMDb published a video on Twitter to take a look back at “cinematic history in salute of the pioneering women directors and their groundbreaking work,” the online entertainment database tweeted along the video that featured scenes of Bani-Etemad’s 2014 drama, Tales (Ghesseh-ha).

Born in Tehran in 1954, Bani-Etemad – who holds a Bachelor of Arts degree in film studies from the Dramatic Arts University in Tehran – is widely considered as the most important female director in Iran, titled ‘First Lady of Iranian Cinema’.

Her movies and documentaries picture social and cultural issues and complications in modern-day Iran.

The Tales – which adopts an episodic narrative – portrays the fates of seven characters of Bani-Etemad’s previous flicks.

The film won the award for Best Screenplay (written by Bani-Etemad and Farid Mostafavi) at the 71st Venice International Film Festival.

Rakhshan Banietemad, born in 1954 Tehran, began to make documentaries for the Iranian National Television in 1979, right after graduating from the University of Dramatic Arts, Tehran. From 1979 to 1987 she focused on making only documentaries. In 1987, she directed her first feature film Off the Limits. In 1991, she became the first woman recipient of the Best Director award for Nargess at Fajr International Film Festival in Iran. In 1995, she won the Bronze Leopard for The Blue Veiled at the Locarno Film Festival. Under the Skin of the City, her next film, was the highest grossing film in Iran in 2000. This film along with Gilaneh (2005) and Mainline (2006), garnered major awards in more than 50 film festivals.

While Banietemad’s feature films have been acclaimed and honored worldwide, her documentaries have also been successful and popular internationally. Our Times …, was the first documentary ever to be released in the movie theatres in Iran in 2002. It was also screened in highly prestigious and prominent festivals and TV channels such as IDFA, Sundance Film Festival and ARTE.

Banietemad started her work by making documentaries and has never ended the strong connection she has always had with her works. Making documentaries have been her main way of connecting with the society and social issues. Her approach and in depicting social issues has been so strong and effective that her works have always resulted in causing change in the lives of her documentaries’ characters.

More recently, she has joined the Academy Oscar, Writers branch in 2017.

KARA Film Studio is a name under which a group of professional Iranian filmmakers express their common concerns regarding humanistic, social and cultural issues through documentary films, while maintaining their own diverse and distinct vision. In KARA Film Studio, filmmakers in small or large numbers, gather together and, starting with an outline of a documentary project, complete the work in a professional manner.

KARA Film Studio operates under a number of principles: personal financing or financing through private sector; working as teams and in a workshop from development of an idea through to its completion and distribution; giving young and talented documentary filmmakers an opportunity to work with professionals and assistance with their development, due respect for the audience by maintaining high standards in the production phase, endeavor to provide improved and increased means of screening films inside and outside Iran; …
Rakhshan Banietemad and Mojtaba Mirtahmasb are the constant participants in this group.