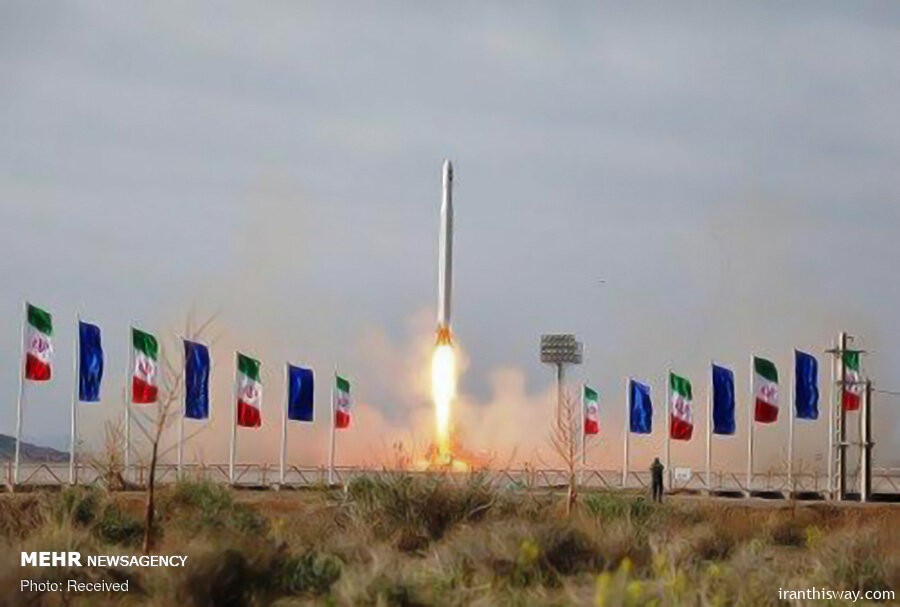 The elite force launched the Noor-1 Satellite by the domestically-built launcher Qassed (messenger) on Wednesday morning and placed it into the orbit at an altitude of 425km.

Iranian President Hassan Rouhani said that the launch of Iran’s first military satellite into space by the Islamic Revolutionary Guards Corps (IRGC) is ‘valuable and blessed’.

“We intend to show world that our activities will continue despite hardships and difficulties facing ahead of the country.”
He made the remarks on Thu. in the inaugural ceremony of national and infrastructural projects in Fars province, held at Sa’dabad Palace via video conference.

Increasing production volume of aluminum in the country as much as 100 percent is one of the honors taken at the government dubbed ‘hope and prudence’, he said, adding, “72 percent of which belongs to the unit that its first phase was inaugurated today.”

He expressed his thanks to the unsparing efforts of the private sector and banks and other functionaries who played a key role in launch of this industrial and production unit in this province in a short period.

The elite force has played a major role in the doctrine of defense based on deterrence and firm response to aggressors. This institution has also proved its strategic and decisive role in dealing with security and military threats beyond the geography of Iran.

“Nahid 1” telecommunications satellite to be sent into orbit this year

Head of Iranian Space Agency (ISA) Morteza Barari said on Sat. that “Nahid 1” telecommunications satellite will be sent into the orbit in the current year [started March 21, 2020].

He pointed to the prioritized projects in space section of the country in the current year and added, “with the necessary coordination made with the commissioner of launcher, “Nahid 1” telecommunication satellite will be sent into the orbit before the termination of the current year [to end March 20, 2021].”

“We hope that the flight model of the country’s three major space projects [including ‘Orbital Transmission System’, ‘Pars 1 Sensing Satellite’ and ‘Nahid 2 Telecommunications Satellite’ will be completed according to the scheduled programs in the current year,” he added.

Elsewhere in his remarks, Barari pointed to the Students’ International Small-Scale Satellite Project, which is being implemented by Asia-Pacific Space Cooperation Organization (APSCO) in Iranian Space Research Centers in cooperation with three universities of the country, and added, “since this project is done in international level jointly, we should try to take advantage of high capacities and potentials of this international organization effectively.”

The deputy minister of Communications and Information Technology (ICT) emphasized the need for developing infrastructures in the space field and added, “existing capacity of Iranian Space Research Center should be used optimally. In this regard, updating space programs of the country in the fields of developing space systems and navigation technologies is one of the main tasks of the Agency that this Research Center can play a constructive and important role in relevant issues.”

He called for the promotion of bilateral cooperation between the Iranian Space Agency and Space Research Center for developing international relations.

Turning to the motto of the current year named after ‘Surge in Production’ by the Leader of the Islamic Revolution, Barari said, “Iranian Space Agency will take giant stride in the current year in relevant issues.”