Tehran is ahead of London in coronavirus battle: Sadiq Khan 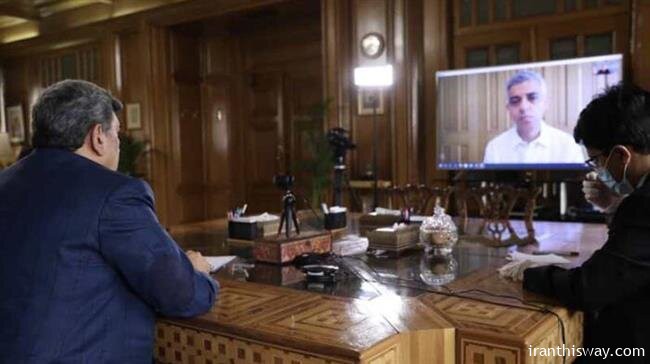 Mayor of London Sadiq Aman Khan has said that many of the measures taken in London to counter coronavirus are similar to those taken in Tehran, and Tehran is even ahead.

Khan made the remarks in an online meeting with Tehran mayor Pirouz Hanachi on Friday.

Referring to the conditions imposed on Iran by U.S. sanctions, Khan said: “In meetings with the British government officials, I would tell them about the problems of Tehran in relation to sanctions and I hope that this problem will be solved soon.”

Hanachi for his part noted that Iran is fighting coronavirus and sanctions at the same time, adding “Despite the pandemic, start-up businesses have been activated in Iran and many services were provided in person before the outbreak, are now done online and on virtual networks.”

Elsewhere in his remarks, Hanachi said that in the global crisis, countries usually put aside their differences and problems and try to help each other so that the situation does not get worse.

To many of us urban administrators in Iran, the onslaught of coronavirus has underscored an important fact of life: no town, city or nation can be indifferent to global crises, even in far-flung corners of our world, Hanachi told The Guardian on April 4.

Indeed, while the mantra of good governance over the past century has been to “think global, act local”, we must today think and act both locally and globally.

“I would tell British government officials about the problems of Tehran in relation to sanctions and I hope that this problem will be solved soon.”/Mayor of London

Doubtless, there are things that we could do differently, like every country in the world. But we are operating against the backdrop of the most extreme sanctions regime in history.

The US embargo not only prohibits American companies and individuals from conducting lawful trade with Iranian counterparts, but given that the sanctions are extra-territorial, all other countries and companies are also bullied into refraining from doing legitimate business with Iranians, even the selling of medicines.

This unjust treatment of Iran has come about via the policies of one country – the United States – whose ruling administration does not seem to prioritize even its own national interests, but instead the narrow interests of a governing party. The outcome of such irresponsible policies and behavior is not limited to Iran; they have also inflicted harm on the American public.

In order to better confront these new global crises, there is a need for politicians to realize that the path to pursuing national interests is not separate or contrary to that of global interests and international accountability.

The world cannot go on like this. If global leaders fail to seize the opportunity to embrace change, we will all continue to remain highly vulnerable to communicable diseases, environmental catastrophes, global warming, terrorism, violent extremism and other shared threats.

Health Minister Saeed Namaki has said that the daily death toll and positive cases of coronavirus in Iran have dropped respectively to one third over the course of three weeks, which is a source of honor for the country amid the tough sanctions.