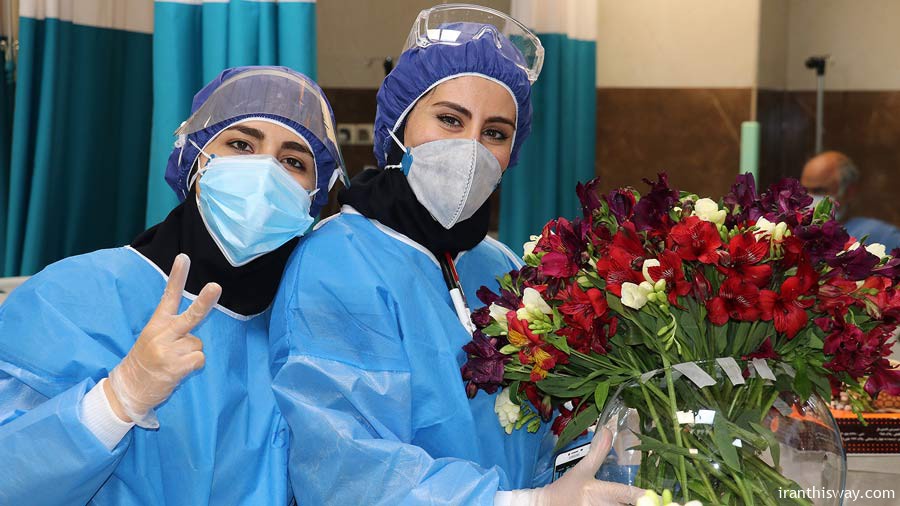 Sadeq Hosseini, Farbod Khalili: As of the filming of this report, three months have passed since the coronavirus outbreak went from a news story on TV to an everyday reality for Iranians. Schools were closed, businesses shut and people sent home self-quarantining. In the meantime, while urban life as we all knew it, was almost put on hold, there were still some people who were busy working. Not for money. But for kindness and compassion. Thousands of Iranians volunteered to help their fellow citizens and provided these services:

Since the early days of the corona covid19 pandemic, the Shokoufeha Charity for children with autism, In one of the Tehran’s eastern neighborhoods halted most of its activities and instead had these volunteers prepare and distribute for free sanitary packages.

Behrouz Khosravan CEO of Shokoufeh Charity for Autistic Children said: “The Charity was founded in 2017. It has taken 70 kids under its wings, providing them with food parcels and medicine. 30 kids receive monthly pensions while we provide rehabilitation services to 45 kids at the charity’s central branch.”

Director of Shokoufeh Charity added: “The activities of the rehabilitation center were halted soon after the start of the outbreak. Therefore, our psychotherapists and occupational therapists provided families of the autistic kids with educational content online. We also prepared sanitary packages and distributed them among the families. We have managed to distribute over 80 thousand packs among supported families and across the city.”
Haniyeh Abbasi is social worker in Shokoufeh Charity for Autistic Children said: “In early February 2020, after the outbreak, the charity decided to prepare and distribute sanitary packages that include a face mask, gloves and a hand sanitizer gel among the needy to help lighten the load for hospital staff and officials alike. We hope the recipients of these packages can use them in good health. We also gave these packages to the families of autistic children under the charity’s protection since most of them are financially challenged. So we decided we could prepare these packages with the help of donors to lighten the load for them.”

Hanieh mention that: “After outbreak we started to reduce the number of the classes and instead offered online sessions. We also pay their families some cash handouts every month to help them with their medical and other daily expenses.”

Retired teacher who is member of Charity member also said: “Whoever has to deal with autistic children inevitably becomes kind and compassionate. Therefore, all these people here have been doing voluntary work without ever once complaining.”

The volunteer who took the corona

Firouzgar Hospital has been one of the main coronavirus treatment centers in Tehran, and also where Meysam Ameri was working voluntarily until he contracted the disease.
Meysam Ameri is a 35-year old graphic designer working out of his home studio in north of Tehran. Since the early days of the outbreak, He began his voluntary work by handing out free face masks and gloves in Tehran subway, and disinfecting the Grand Bazaar.
In early April 2020, he volunteered to help the fight against coronavirus at Firouzgar hospital where he finally contracted the disease 20 days later.

Meysam recounted his story of joining Firouzgar Hospital:
It was 25 of us, men and women, who joined the hospital as the first volunteer group. We had an agreement to take care of all the things left unfinished after receiving initial training. For a while, we only did office work and disinfected the exteriors until we gained the trust of the hospital staff, and were then allowed in the Coronavirus ward after receiving appropriate training.
Aside from carrying out duties like taking test samples to the lab, and taking the results back, and going with patients to get CT Scans, we – as caregivers- also helped the patients getting to, using the toilet or changing their diapers.
We would form emotional bonds with patients to make their hospital experience and their battle with the disease more bearable. We would also help patients video call their family members. Other creative things we would do include giving them haircuts and even massage! We would also make fresh fruit juice. It was a favorite with patients and the medical staff alike!
We were later received training for some more technical nursing tasks like taking blood pressure and body temperature, and reading a pulse oximeter that monitors oxygen levels in the patients’ blood.
About 80 other caregivers joined us in the meantime. Still anyone who desired could leave. So on my last day at the hospital, there were about 20 of us volunteers there.
One other interesting thing we did was to throw a surprise birthday party for one of the nurses whose wedding had been cancelled due to the pandemic. We also held a ceremony to celebrate the birthday of Imam Mahdi on Mid-Sha’ban. Just like our other expenses like the cost of gowns and face masks, the cost of holding the event was paid through donations.

Meysam told us the hospital work was heavy and stressful. He would start working after performing his prayers at dawn, and would not go to bed until well after midnight. He believes his extreme physical fatigue contributed to his disease: One night, after twenty something days at the hospital, I realized I had a temperature and I was breathing heavily. At first, I thought it was just fatigue from working long hours. I went to the emergency department and underwent a CT scan just to realize my lungs were affected. I stayed there for three days until I could breathe easier. Then I spent 20 more days at home self-quarantining.
Coughing was not one of the symptoms. Instead, the symptoms were a high fever, and severe muscle and chest pains. Three weeks after the quarantine, my breaths are still short and heavy.
But none of these pains hurt Meysam as much as the pain of not seeing his family, he mentioned: I could not see any of my family members for 45 days, from the night I was admitted to hospital to the last day of my quarantine. I have a 9-month old son and a 5-year old daughter. My son had started crawling and grown his first teeth when I got to meet him again. Separation from my wife, kids and parents was my toughest experience.

Pirouz Hanachi Tehran Mayor during the visiting thousands of food packages prepared for the needy said: All donors, volunteers, Tehran municipality and Basij forces are working to create a database so that the process of distributing food and health packages could be done fairly.

Faezeh Dolati is cultural deputy of Tehran 7 district municipality mentioned:
The municipality of borough seven, as one of the twenty-two boroughs of Tehran, provides various services to the citizens such as:
⁃ holding entertainment activities like street carnivals in the neighborhoods. In this way, people by respecting social distance, can watch and enjoy from their homes.
⁃ Managing and coordinating voluntary services, for example We produced around 2 million face masks with participation of local volunteers.
⁃ Preparing and Distributing nonperishable food packages for impacted families in collaboration with local businesses In order to participating in social responsibility.
⁃ Transforming neighborhoods centers into covid-19 service centers for monitoring and screening to help health care system
⁃ and finally, identifying vulnerable people and those who lost their jobs due to Corona virus crisis while distributing health packages

Mehdi Shirzad headquarters office of organizing social participation in Tehran mucipality about about Tehran’ voluntary work during the lockdown said: Fairly speaking, they did absolutely great with the fight against the coronavirus outbreak, and with collecting donations. So did mosque Imams and all who do social work there. Youth volunteer groups also helped a lot in the neighborhoods. This proved that urban crisis management is almost impossible without citizens’ help. The municipality’s most important achievement was the creation of a platform to connect NGOs to volunteers. So citizens can upload their resumes on this platform and then join events organized by NGOs, or even hold their own charity events.

Mostafa Foroutan who is Heydaraneh Campaign Manager said:
A number of Volunteer groups joined forces and created the Heydaraneh movement to be able to produce more comprehensive work during the coronavirus outbreak. In the beginning, like many other groups, and since we didn’t know how to exactly combat the virus, we began our activities by disinfecting public places, and later produced and distributed face masks.
In the next phase, and on the recommendation of hospitals, we started making a gravy-like puree from quail meat extract and medicinal herbs.
The movement also managed to prepare and distribute about 4000 essential food parcels for needy families.
We also collected donations for those directly impacted by the outbreak.

Hossein Bolandimonfared director of volunteer group that preparing food said: During the coronavirus outbreak, with the help of other volunteer groups, we have been preparing 3500 high quality hot meals every day.
Making fresh fruit juice for hospitals is another thing our group has done. A supervisor from the health ministry would oversee the whole process 24/7 to make sure the product meets health standards.
I should stress that we received an unprecedented amount of volunteer help for the supply, preparation and distribution of the meals. The level of participation was much higher than during the 2019 floods and Kermanshah’s 2017 earthquake.
Iranians have proven to be people of hard times. While people in other parts of the world were forming long queues outside supermarkets, and even seen fighting, Iranians were standing in line for voluntary work. This is really valuable that people care about one another in this situation.

The 6 months after the coronavirus pandemic, about 360 thousand Iranians have contracted coronavirus, and seven thousands -unfortunately- lost their lives. The first wave of the covid-19 is now behind us.
We, the people of Tehran, have brought this malicious outbreak under control for now, well of course, with the help of the government and municipality. The exact numbers are still to be fully worked out, but estimates show over half a million Tehraners have offered some kind of voluntary service during the first wave of the outbreak.