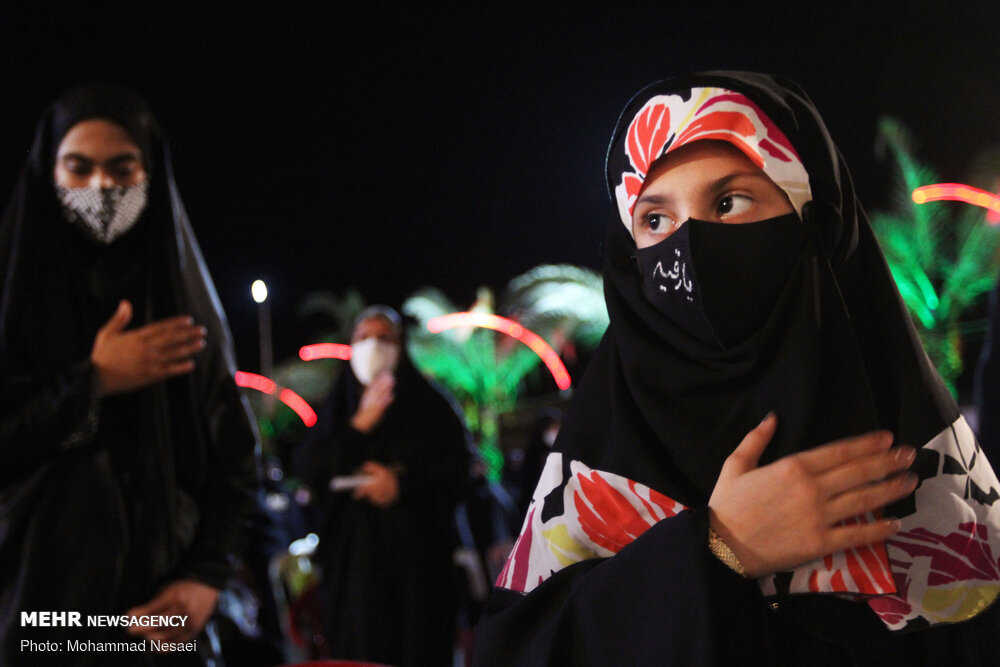 Iranian all over Iran mourning the martyrdom of Imam Hussein with observed the health protocol of Corona Covid-19 virus.

The Muharram mourning ceremony was held at the Imam Khomeini Hussainiyeh with Ayatollah Khamenei in attendance. Due to the Coronavirus pandemic, this year’s mourning ceremonies are not being held publicly.

What is the origin of Ashura?

Leila Yazdani: If we wish to find out the causes of the rise of the Imam Hussain (A.S.) we have to make a search for its preliminaries during a period of at least thirty years preceding that time, because about thirty years after the migration of the Holy Prophet (PBUH), there had taken place such developments as had made necessary a movement like this in the Islamic society.

At this time, the Islamic method underwent a change and it assumed another posture. Taking advantage of this state of affairs the people began to amass wealth and property from the Baytul Mal (public treasury) of the Muslims. It was the same Baytul Mal that was guarded so carefully by Imam Ali (AS) during the period of his caliphate.

After Caliph Uthman, Imam Ali (AS) attained the caliphate. The difficult task for Ali (AS), on account of which battles were also fought, was to control these influential persons and not to permit any person any longer to take even one dinar from the Baytul Mal of the Muslims without proper accounting. He wanted to restrain the people from all sorts of covetousness, greed, and bad habits.

Imam Ali (AS) had fought battles against Mu’awiya because Mu’awiya continuously violated the Islamic principles. Imam Al-Hassan (AS) had to swallow the bitter pill of making a peace agreement with Mu’awiya, in order to safeguard the security of the Ummah which was at stake. But, Imam Hussain (A.S.) as the Head of Ahlul Bayt (PBUH) never recognized Mu’awiya nor his followers.

When Yazid son of Mu’awiya declared himself as a ruler over the Ummah, he demanded Imam Hussain’s (A.S.) allegiance of loyalty. Imam Hussain (A.S.) on his part flatly rejected Yazid’s rule and behavior, for there was no way Yazid could represent Islam. But Yazid, the tyrant ruler over the Ummah, was adamant in his demand. Like his father Mu’awiya, Yazid used all possible means like bribery, coercion, pressure, threats, and force to receive the people’s acceptance of him as the legitimate ruler.

Many people were worried, threats to their lives and livelihood was too menacing, so they grudgingly and reluctantly gave in. But, Imam Hussain (A.S.) and his family (who practiced Islam in its true sense), did not give in. As the true representative of Prophet Muhammad (PBUH), Imam Hussain (A.S.) flatly refused accepting Yazid either as a Khalifa or a leader of Islam. Despite Yazid’s intimidating military power the Imam stood firm in his resolve and chose to challenge Bani Umayya’s authorities.

Imam Hussain (A.S.) also knew that giving allegiance of loyalty to an imposter like Yazid would certainly place Islam at great jeopardy. Imam Hussain (A.S.) and a majority of true Muslims believed that Yazid the then brutal ruler of Bani Ummayad was openly going against the pure and genuine teachings of Islam in public and violating the Sunnah of the holy prophet and the core practices of Islam.Therefore he decided to leave Mecca for Kufa to prepare for a confrontation with Yazid and his forces. Infact, Imam Hussain’s (A.S.) refusal to accept the tyrant Yazid’s allegiance triggered the Battle of Karbala on the Day of Ashura.

The Imam (AS) quoted the Prophet (PBUH):

“If somebody witnesses a tyrannical king who practices forbidden (Haram) acts as if they are permissible (Halal), breaks the Divine Promise, opposes the Prophet’s (PBUH) way of life (Sunnah), and oppresses people while saying and doing nothing to stand against the tyrannical ruler, Allah (SWT) will place him/her in the abode of that oppressor.”

Then the Prophet (PBUH) enumerated the crimes of the Umayyads. The above saying was used in either Imam Hussain’s (A.S.) letter or speech. It not only demonstrates his irreconcilability with the enemy and strong determination but also indicates that he would make any effort to demonstrate this heroic spirit to the society.

After arriving in Karbala, Imam Hussain (A.S.) gave his companions a speech, saying:

“Under such circumstances, a faithful person should be willing to make any sacrifice to see his Lord (God). In such a situation as mine, I would consider death nothing but salvation and living with oppressors nothing but humiliation and ignominy”.

A Probe into the History of Ashura’, Ibrahim Ayati