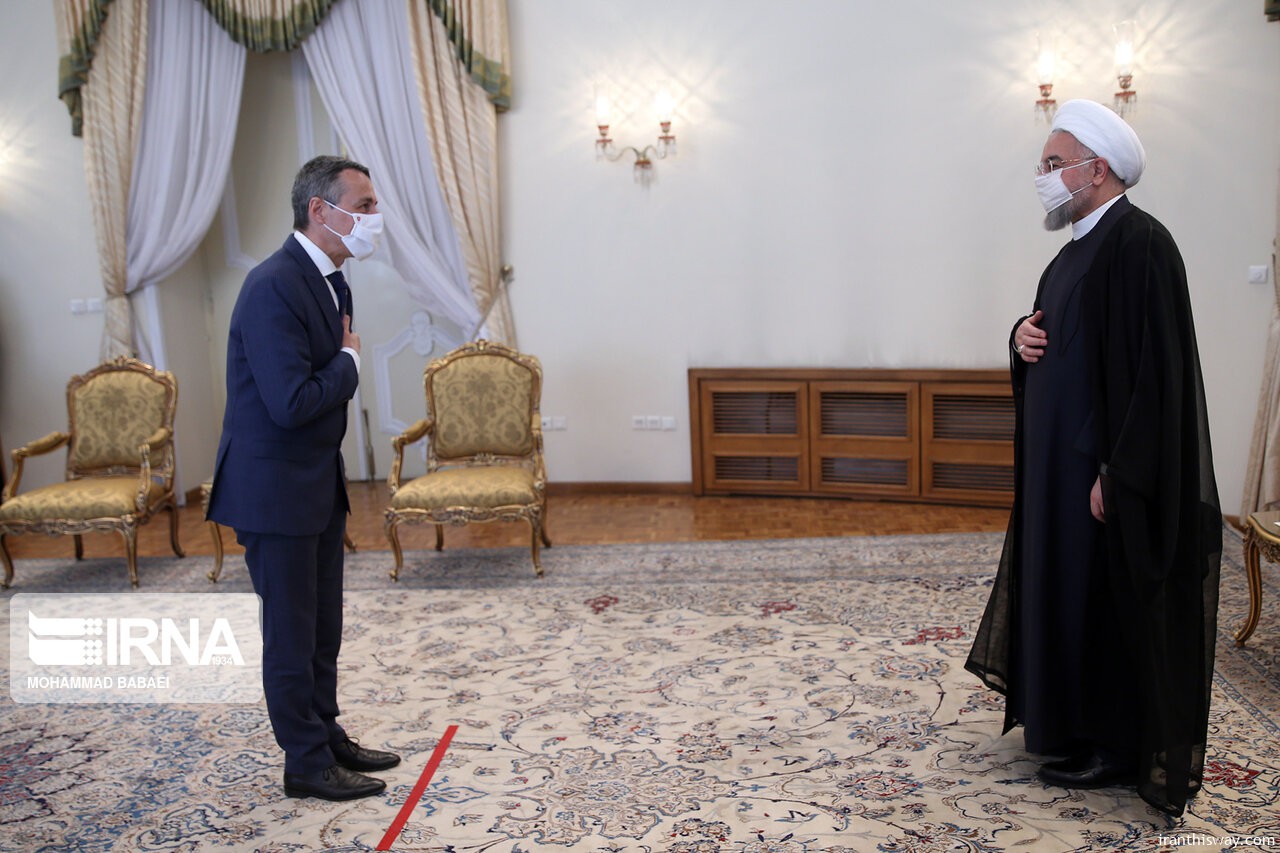 President Hassan Rouhani and Swiss Foreign Minister Ignazio Cassis on Monday held talks in the capital city of Tehran to confer on the issues of mutual interests.

The President said that the United States, by withdrawing from the Joint Comprehensive Plan of Action (JCPOA) and violating UN Resolution 2231 with the aim of overthrowing the Islamic Republic, has imposed cruel and unjust sanctions against the Iranian people for the past two and a half years, adding, “History has shown that the Iranian people will not give in to the bullying and coercion of a power”.

Speaking on Monday in a meeting with the Swiss Foreign Minister, Hassan Rouhani said that the relations between countries should be based on international regulations and UN Security Council resolutions, adding, “The United States has been seeking to eliminate the Islamic Republic and interfere in Iran’s internal affairsfor many years, and Mr Trump has made a miscalculation by thinking that he could overthrow the Islamic Republic within three months by putting pressure on Iran and waging an economic war”.

Emphasising that we have been -and will be- committed to international rules and multilateral agreements, Rouhani said, “Any day that the United States decides to admit to its mistakes, make up for its illegal actions and return to Resolution 2231 and the JCPOA, the path is clear for them”.

The President emphasised, “Today, it is clear to the Americans that they have made a mistake and will not achieve their goal through pressure and sanctions”.

The President described US sanctions and economic war against the Islamic Republic, the assassination of a high-ranking Iranian military official in another country, as well as the violation of Iranian airspace as clear examples of economic terrorism, terrorist operations and air terrorism by the country, adding, “We expect all friendly and free countries in the world not to remain silent in the face of terrorism and the illegal actions committed by the United States over the years”.

Dr Rouhani stated that we expected the European countries to take decisive and explicit action against the US economic terrorism, which has even prevented the entry of drugs into Iran during the outbreak of coronavirus, calling for a more active part on Switzerland’s financial channel and its more effective and useful role.

In another part of his speech, the President mentioned Switzerland as an important country in Europe, and referring to the good and friendly relations between the two countries over the past years, emphasised the development of Tehran-Bern relations in various fields of science, health, agriculture, environment, etc.

Dr Rouhani also referred to the outbreak of the global coronavirus in many countries around the world, and expressed hope that the two countries would share their experiences in the fight against COVID-19 and develop their cooperation in this regard.

Referring to the 100th anniversary of the establishment of political and diplomatic relations between the two countries, the Swiss Foreign Minister Ignazio Cassis described the relations between Iran and Switzerland very good and sincere, and stressed the development and deepening of these relations in all fields.

“All countries around the world need to know that there is a strong legal system in the world so that they can live in security; therefore, it is important that everyone, especially powerful countries, fully comply with international rules and regulations,” said the Swiss foreign minister.

We are aware of the problems caused by the US sanctions on the Iranian people, said Foreign Minister Cassis, adding, “The Swiss financial channel has been designed and launched to solve these problems and we will try increase the useful role of this channel”.

The Swiss Foreign Minister said that we are still with Iran to solve the problems and we will try to play our part, adding, “During this visit, I had very good meetings with the officials of the Islamic Republic, which can be the basis for developing and strengthening relations between the two countries in different fields”.

Iran’s non-oil exports to China up by 52%