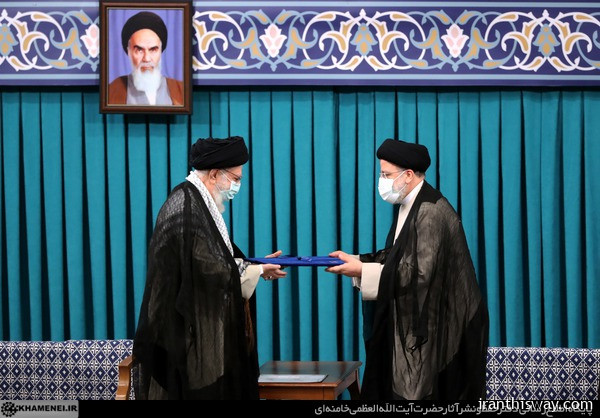 Supreme Leader of the Islamic Revolution Ayatollah Seyyed Ali Khamenei on Tuesday endorsed the decree of Ebrahim Raisi as the next President of Iran.

Based on article 110 of the Iranian constitution, the endorsement of the presidents’ decrees is among Supreme Leader duties.

The various confirmations of presidents are proof to the fact that the Islamic Republic is based on Islamic laws and the votes of the people. In all confirmation texts recited by Imam Khomeini and Ayatollah Khamenei, the expression of “confirming people’s vote” comes before “appointment as President.”

Prior to the endorsement ceremony Iranian Interior Minister Abdolreza Rahmani Fazli presented a report of the process of holding the 13th presidential elections.

Leader of the Islamic Revolution Ayatollah Seyyed Ali Khamenei has called on new President Ebrahim Raisi and the Parliament to pave the ground for the formation of the new administration due to the current situation of Iran.

Supreme Leader made the remark during the endorsement ceremony of the new president in Tehran on Tuesday, noting that resolving economic problems is a time-consuming job and the revered people of Iran are well aware that problems cannot be solved over one night or in a short period of time.

It is important that an all-out effort is needed to narrow down the time period, Ayatollah Khamenei said, adding that with the help of the almighty God, the job will be done and progress will be made.

There is a piece of necessary advice, which is the acceleration of forming a new government because the current situation of the country does not allow any delay, the Leader said, noting that the honored president should speed up offering his proposed ministers to the parliament and the revered lawmakers should accelerate endorsing the cabinet picks and of course they are expected to comment frankly on the proposed ministers to form the new government sooner.

Pointing to President Raisi’s communication with ordinary people as a good opportunity to find out day-to-day problems, the Leader asked Raisi to utilize the elite’s expertise as well.

Fortunately, Raisi reiterated that he will rely on the principle values of the Islamic Revolution, including justice and the fight against corruption, which is a correct path, the Leader mentioned.

Supreme Leader also stated that every economic or non-economic move should be part of a scheduled program to guarantee progress in the country.

Ayatollah Khamenei thanked God for the opportunity that the Iranians could cast their vote during the 13th presidential election to show the importance of religious democracy and the fact that the Iranian people firmly responded to the enemies’ plots.

The shift of power is promising because many new officials will take power and fresh enthusiasts especially the youths will find the opportunity to collaborate, the Leader added.

Ebrahim Raisi, the new President of the Islamic Republic of Iran, said on Tuesday that the June 18 presidential election was a symbol of religious democracy during which the Iranians showcased a glorious turnout.

Raisi made the remark during his endorsement as president by Supreme Leader of the Islamic Revolution of Iran Seyyed Ali Khamenei in Tehran on Tuesday.

The new president thanked Almighty God for His numerous mercies in particular the Iranian people’s confidence and the Leader’s endorsement.

The shining sun of religious democracy has risen more than 40 years in the country under the guidance of the Grand Imam and with the help of the great and responsible people to present a new model of governance to the world, Raisi stated.

This kind of governance represents a new version of governing by using religion along with world issues, science along with morals, justice along with progress, and dignity along with welfare, he said, noting that all should know that spirituality has been interrelated with the life of contemporary human beings.

Religion can rule all aspects of human life and in one word, republic along with Islamic and independence along with freedom are interconnected, he argued.

The statesmen and people have made all efforts to materialize the objectives of democracy over 40 years, Raisi said, adding that paying attention to the guidelines of the Leader caused progress, while ignorance to the guidance led to problems in Iran.

The June 18 presidential election was an important occasion when the Iranian people overcame all hostilities of the foes and difficulties caused by the COVID-19 pandemic to display a great epic when it came to their turnout, the new president noted.

On Friday, June 18, the 13th presidential election was held simultaneous with the sixth round of city and village councils elections, the first mid-term for the 11th parliament’s by-election, and the second mid-term for the fifth Assembly of Experts election.

Out of over 59.3 million eligible voters in the presidential election, nearly 29 million took part in the national event. Ebrahim Raisi won the presidential race with 17,926,345 votes out of the total 28,933,004 ballots, which shows 48.8 percent turnout.