Much vaunted taekwondo star has taken Iranians by surprise of his untimely defeat in the very first round against Moroccan rival he thought was easy to win.

Iran’s taekwondo would have been source of hope for the delegation for possible medals; however, on Wednesday, the first section of this hope was squandered only by defeat Farzan Ashourzadeh conceded to his average rival Omar Hajjami in -58kg category. Ashourzadeh is the world first seed and was drawn to meet a lower seed, but was surprised when he lost to this underestimated rival 4-0. Ashourzadeh was cautious at the beginning, but his rival was no less cautious as well, and thus the scoreboard indicated no scores for either of the athletes in the first round.

In the second, Ashourzadeh proved more active and agile, but the juries denied him his possible efforts which otherwise could have been rewarded as points. A challenge was requested which changed the points 3-0 for Iranian side. The third round was a round for Hajjami, since, having nothing to lose, he proved aggressive enough to grab points from his formidable rival.

Ashourzadeh was cautious to keep the result except for the ending seconds when the Moroccan stole his attention and got 4 points to shock Ashourzadeh and the rest of the nation. 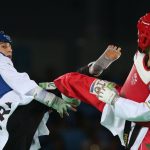 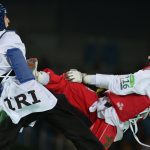 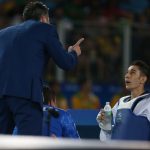 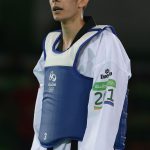 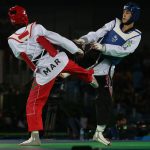 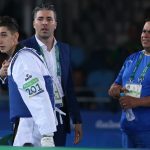 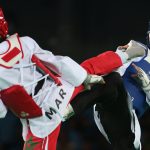 This was a painful surprise when a champion came short of fulfilling national expectation for a gold medal he so badly deserved. The nation grieved, as it did on Tuesday night when one of his champions in weightlifting was denied his points and with it they deprived him of the colorful medals.

In a related story in canoeing, Iran’s representative Adel Mojallali succeeded in standing in fourth place in the first round and advancing to semifinals in men’s 200m. Mojallali crossed the finish line in 41.65 seconds. He will compete in the semifinals on Thursday. This was an event providing some solace for Iranian camp and would alleviate the difficulties and the grief striking the nation./ MNA