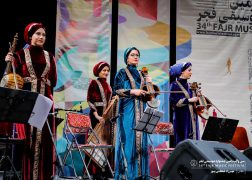 “Khonyagaran-e Mehr” is a female musicians band with a brilliant background, led by Behzad Abdi,that performs various concerts in persian music.
“Khonyagaran-e Mehr”, consists of twelve musicians, formed in may 2017. In August 2017 they held a successful concert at the Vahdat Hall with Mohammad Motamedi as a singer.

In February 2019, they performed at the Fajr Festival with Navid Norouzi as a singer.They also performed in closing the Fajr Music Festival.
In March 2019, they held successful performances in three cities of Germany : Berlin, Hamburg and Frankfurt.
In April 2019, they performed at the “le Magie des Hirondelles du Printemps” festival in Paris,France.
In April 2019, held concert in Bern,Switzerland.
In October 2019 held concert in Womex festival in Tampere, Finland.

WOMEX 19 is one of the world’s largest music events which hostd publishers, independent musicians, organizers, and state organizations in music every year from over 90 countries.

He came to international attention in 2006 with his “Nuclear Symphony”, commissioned by the government to celebrate Iran’s nuclear achievements.

The IMDb database cites film and television music for no less than 43 productions between 2010 and 2018.

Abdi studied setar and Iranian traditional music and also Western classical music at the Tchaikovsky Academy in Ukraine, beginning his studies there in 2003.

His opera “Rumi” from 2009, based on the life of Rumi, with libretto by Behrouz Gharibourm, and with Mohammad Motamadi, has been released on a UK label, Naxos.

Abdi is currently based in Kiev, Ukraine.