Dizi as a traditional Iranian meal, which apparently is better when it is home cooked. I did not get the recipe. 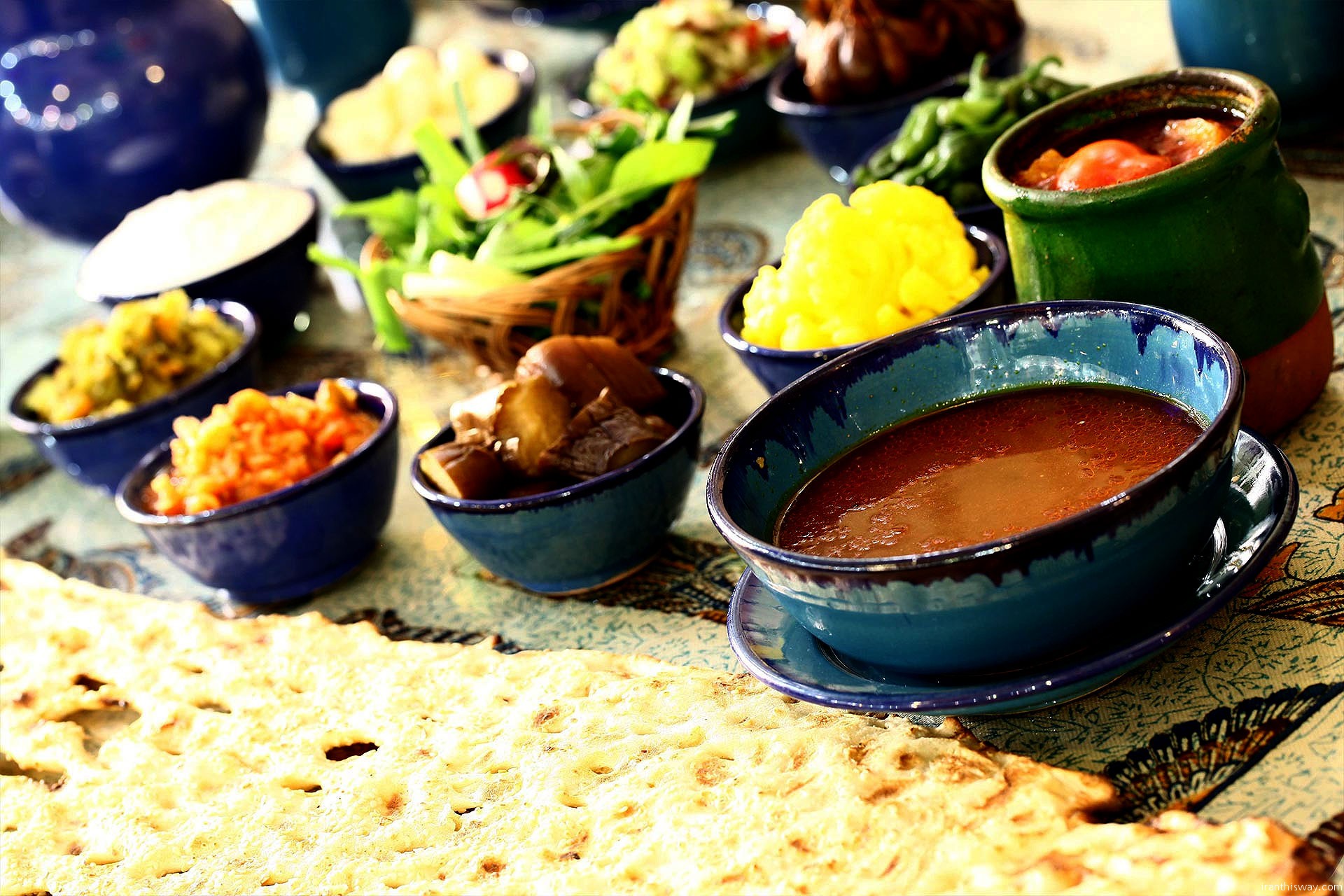 Abgoosht: One of the Most Traditional Foods of Iran

{iranreview.org} Abgoosht is a Persian and Mesopotamian stew. It is also called Dizi, which refers to the traditional stone crocks it is served in. Some describe it as a “hearty mutton soup thickened with chickpeas.” Ābgoosht is usually made with lamb, chickpeas, white beans, onion, potatoes, and tomatoes, turmeric, and black lime.

Other variations exist in the beans used, such as kidney beans and black-eyed peas.

The ingredients are combined together and cooked until done, at which point the dish is strained. The solids are then mashed and served with the broth, but in a separate dish, along with flatbread. It is a form of Piti, which encompasses many similar dishes in the region. 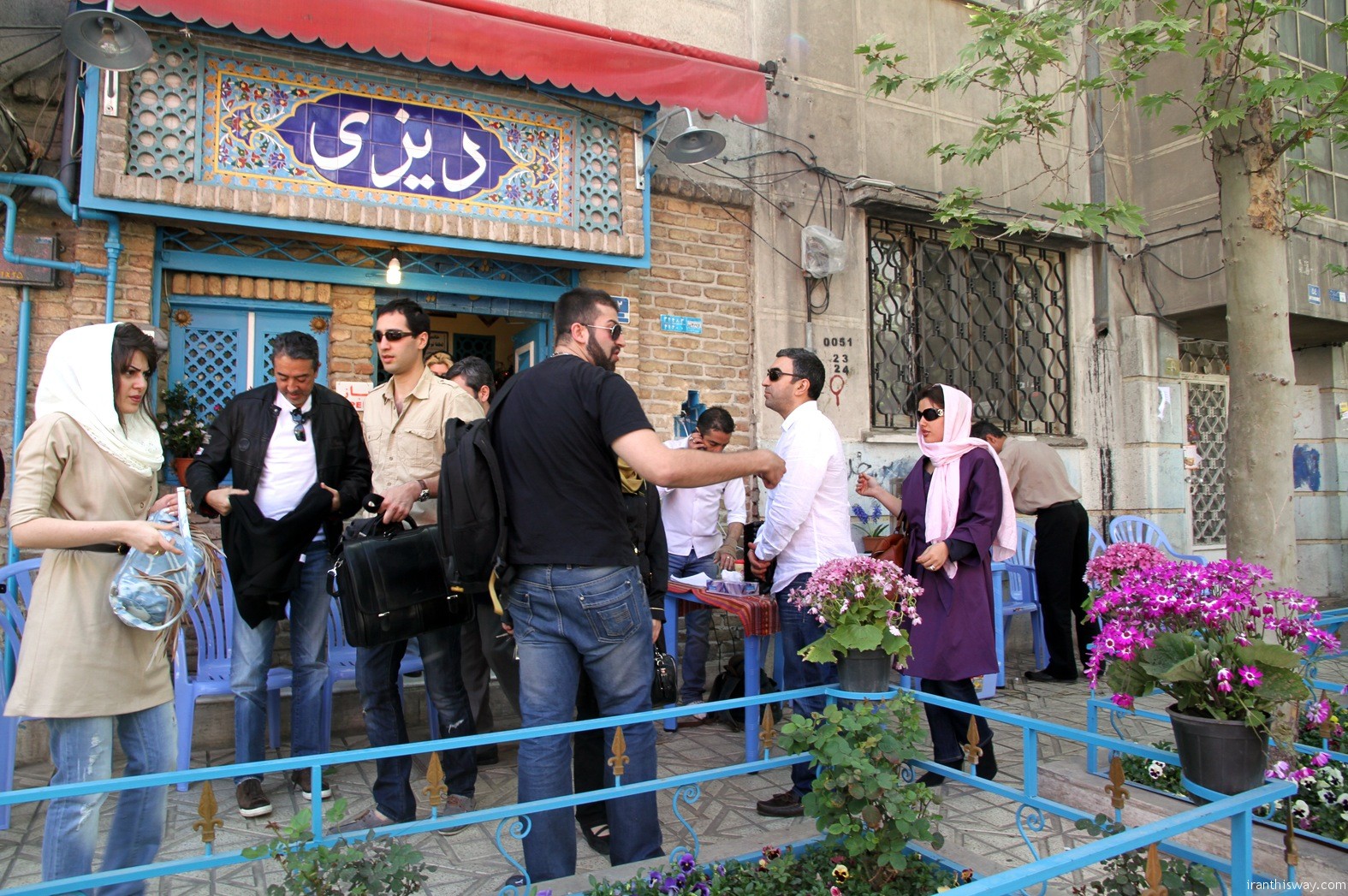 There is a similar dish in Armenia, called the same, Abgoosht stew, the difference between these two is that in Armenia they use beef instead of lamb.

The Abgoosht soup is a traditional Persian meal, often eaten daily in the winter time due to the fact that is a warm meal that contains a good source of protein.

Now onto the recipe! There are a few variations to this dish and this recipe is the first and most simplistic form of it. 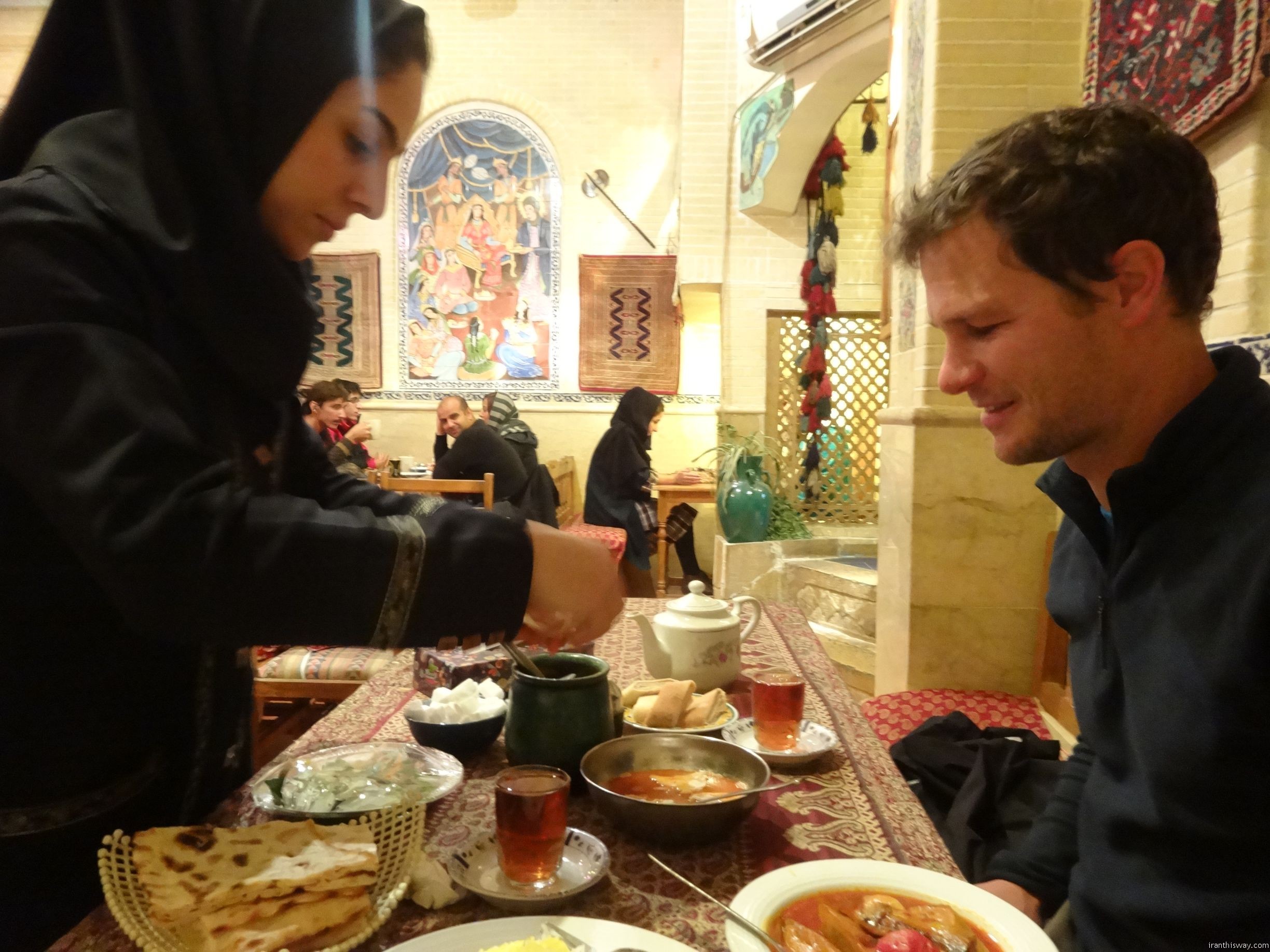 Jon getting a lesson in how to eat dizi

Wash and dry the meat. Season it with salt and pepper.

Chop the onions and place it in a heavy pot.

Add meat on the top of it.

Make a hole in the Persian Limes and add to the pot along with the beans. Add turmeric, cinnamon, and 9 cups of water. Cover and cook it on medium heat for 2 hours

During this time make sure to check the pot and remove any foam that might come to its surface. 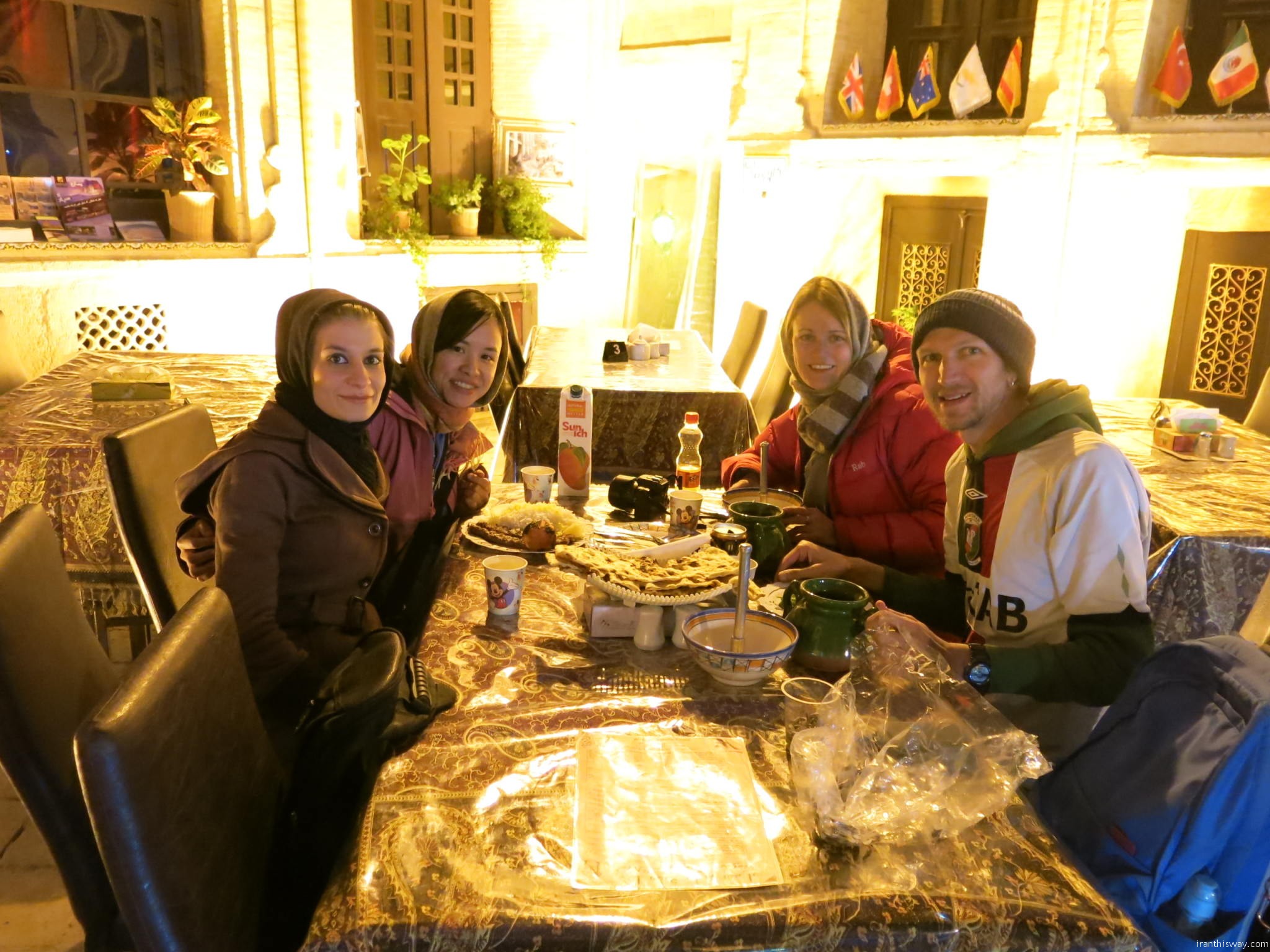 Dizi on Christmas Day in Iran

Add potatoes and adjust seasoning. You will need a good amount of salt due to the beans and potatoes. Cover and cook everything for another hour.

Once done, place a colander over a bowl. Remove meat and place in colander.

Empty the content of the pot in the colander.

Return the broth to the pot and adjust seasoning if needed. Mash meat, beans, potatoes, and tomatoes.

This is how your end product should look like once the solids have been mashed. Taste it for seasoning and add more if needed.

The mashed meat and soup are served separately.

The soup is eaten first. You may put a few pieces of Persian bread in it.

The mashed meat is eaten with Sabzi, Persian herbs, fresh lime, and bread. 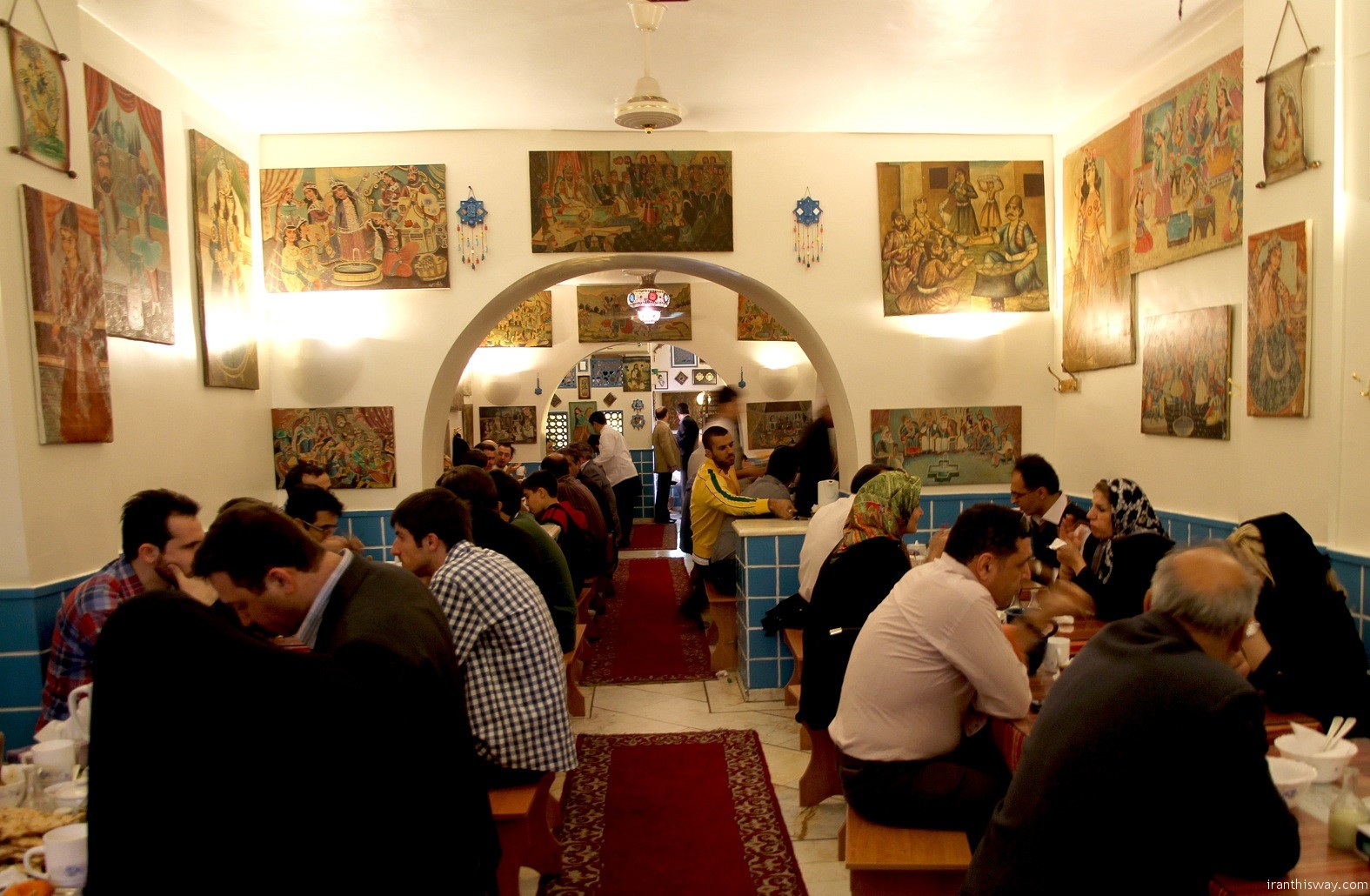 A lot of families go to Dizi restaurants at the weekends. (Photo by Farshid Alyan)

Many times Abgoosht is referred to as Dizi, but this has to do with the dish it is cooked in. Dizi is a dish in which Abgoosht is cooked. Most of the people prefer to eat Abgoosht which is cooked in Dizi, since its ingredients are cooked slowly in a long time and the meal will have special flavor and taste.

There are three major kinds of Dizi (dish) including stony, cuprous and earthen of which earthen Dizi is widely used. But many of us use pots, slow cookers, or even pressure cookers for convenience and the amount of time we have.

Soak chickpeas and beans one day before and change its water. Cook meat with onion, salt, pepper and a little turmeric and spice. Cook chickpea and beans separately and remove its water. Once the meat is cooked, pour chickpeas, beans, green pepper, lady finger and donbeh (fat) along with potatoes in pressure cooker and place it over medium heat without closing its lid. Once the potatoes are cooked, add tomato paste and taste its salt and hot. 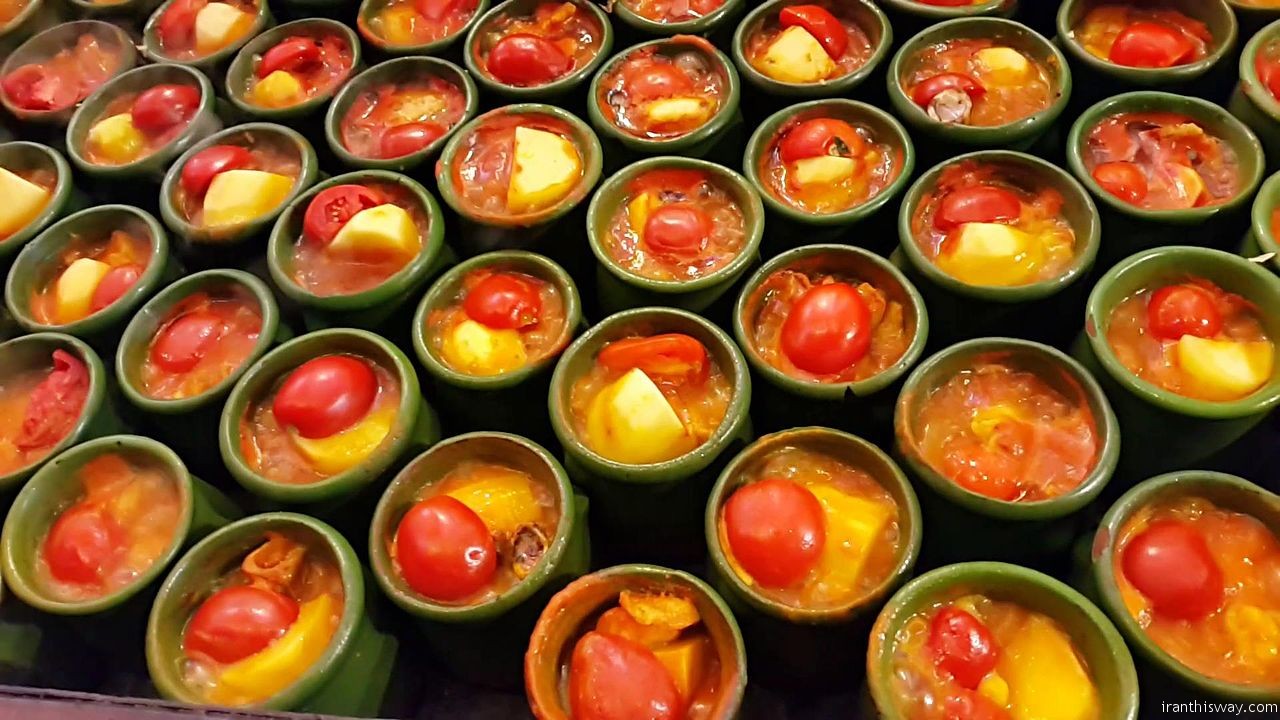 Abgoosht should contain 5 bottles of water in order to make Tilit. You can serve its meat with seasons or you can remove its bones and mash meat, grains and potatoes and design it with fried onion, cinnamon and chopped vegetables. You can also add grated onion, orange and cinnamon on mashed meat and serve it. Pour meat water in a beautiful dish, sprinkle some cinnamon on it and serve it with bread (which had been cut into small pieces before), vegetables, pickles and onion. 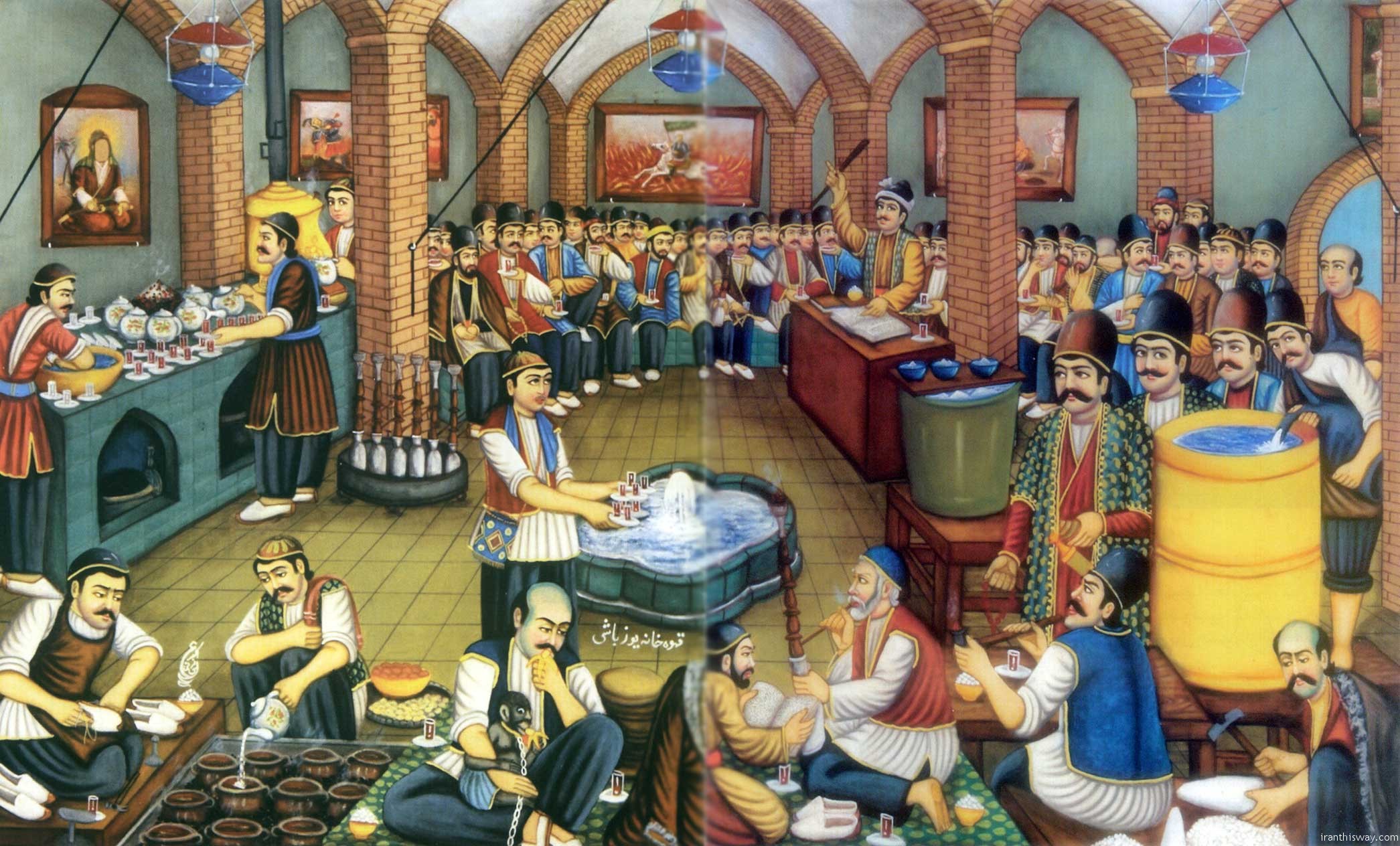